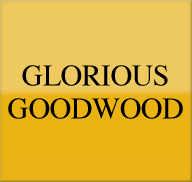 Day one of Glorious Goodwood is here! Each year I’ve always got a little excited about Goodwood as its one of the years bigger events. However what I have learned over the last couple of years is that it’s really not as good as I expect. Often I think its overrated in the trading community, that said it offers some better opportunities than the average week. Particularly nearer the end of the week! (I won’t be doing Saturday as I have my son unfortunately. Although I’m sure I’ll have a better day with him!).

I’ve taken my foot of the gas somewhat this last month or so. It’s an attempt to get that life/financial balance right. I think it’s just as important as money sometimes, with that working to live rather than living to work outlook. Also I think working too much and not having a life can seep into trading results. Or it seems that way for me anyway.

This week I’m going to do one of those weekly updates seeing its Goodwood. It could be worth comparing to last year’s Goodwood to see how I’ve improved (2012, 2011). If I have!

Today seemed pretty fluid on the whole, as mentioned above. I tried not to get too excited for it and it worked out pretty well.

The Goodwood markets in particular were massively different between 2pm and 4.15pm I thought with more turnover. Something else I thought I would do today was monitor my losses. I don’t mean the losses as in, losing markets or genuine bad decisions. But each time I did something where I thought ‘ohh that was a bit stupid’ and lost some cash I made a note of the figure. Even if I finished the market in the green overall.

This is how it turned out…

Pretty shocking really I thought considering today I felt was a smooth day with very little mistakes! It’s something I have thought of before although not really documented it like this, I think I’ll continue to see if it has an effect on me in the bigger picture. I figure if I throw away £200 – £300 on a daily basis in unforced errors and could get them under control a bit more over the space of the year the financial gain could be huge!!

Yarmouth and Perth seemed to be really out of character to me today, one race at Perth in particular I couldn’t quite believe, I was on a steadily backed runner by Lucinda Russel at a short price (2.25 ish) for a fair-sized stake when boom 10k lay came into the market taking me for about 12 ticks, by the time I had exited my stake that was about 17 ticks.
Two unfortunate moments in one day, just happy I came out on top really but I also couldn’t help but wonder when that lay did appear taking me for a massive red if I had been taken for a ride as almost instantly another runner was backed extremely heavily… Still best not to dwell on these things. 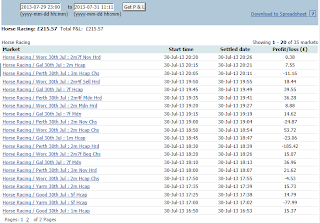 Hopefully tomorrow will be better!