Afternoon people! apologies for the lack of updates but I’ve been extremely busy since the last time i posted! Mixture of all sorts of things, trading, moving, Christmas and work. Hope everyone had a really good Christmas and a great new year!! I certainly did and its been a real shock for me how much life can change over the space of one year. I don’t think 2013 will be much different though to be honest!

Unfortunately I didn’t get much chance to trade over the festive period, a shame as I really had planned too but found myself hung over and having too much of a good time to tear myself away from the atmosphere! Did an hour or so on boxing day although didn’t even bother watching the big race after I traded it!! (was feeling pretty rough) still the markets seemed to hold up as usual so I hope you all filled your boots in my absence.

So a new year and a new start, the normal jobs going in for me as I seem to be continually improving… to match the likes of any of the big names in this game im still a while away but I think it could happen!! Bit of a no brainer as far as the job goes, so hopefully the PC3 charge perimeters wont come down this year, gotta be in it to win it and all that though.

This year has started pretty well for me on the whole ive only traded a few days so far but if its anything to go by for the rest of the year I will have made a very good decision finishing with my standard job, hopefully never having to go back to it!! Here’s a peek from yesterdays efforts… considered it to be an ok day on the whole but nothing special. 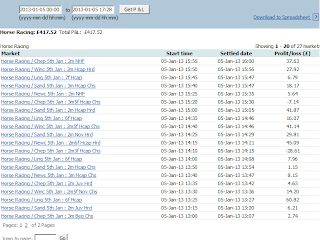 Will try to update more than I have been recently although it’s all very busy at the moment for me!