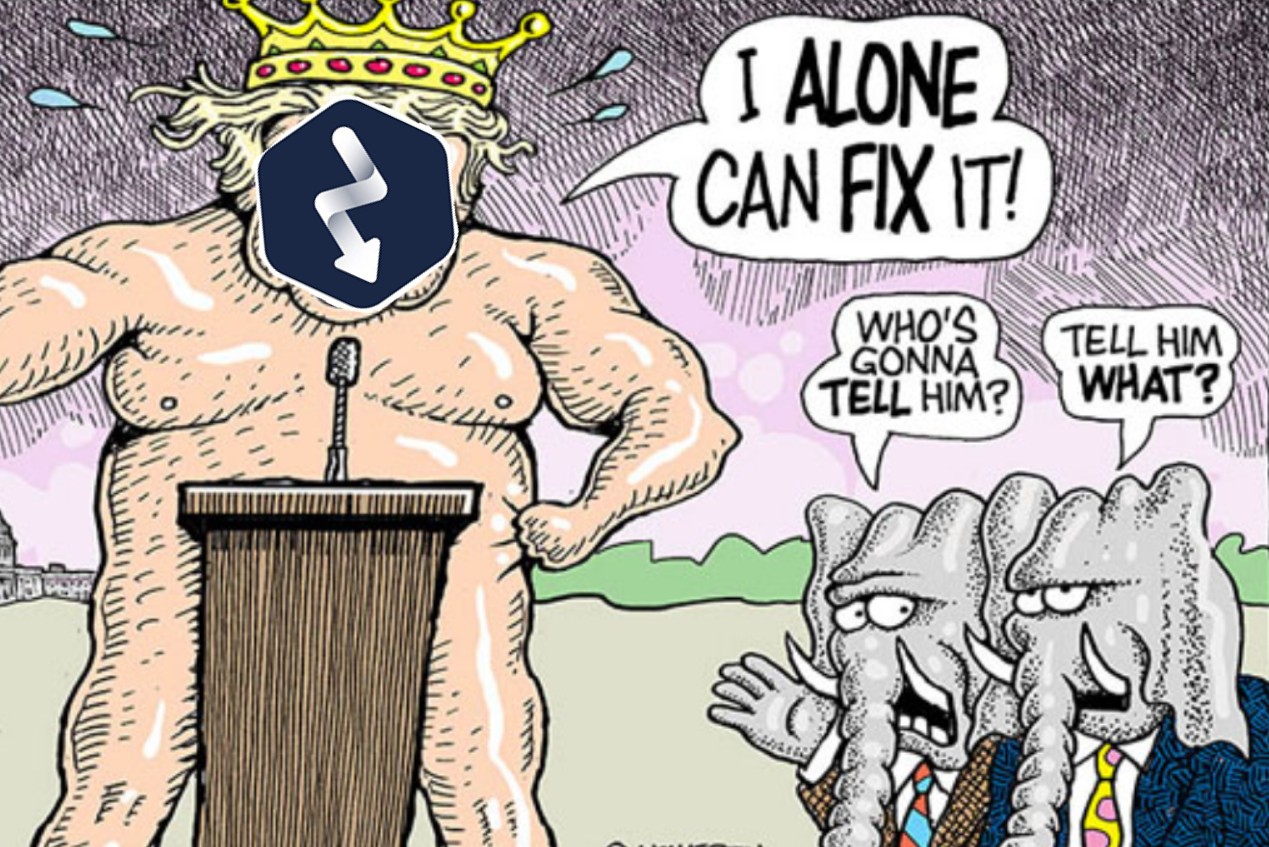 Written by The Geek

Some of you will already know me by my online persona “The Geek”, the developer of Geeks Toy trading software, and the Profit Rush matched betting site which is a joint venture between my company and Caan’s.  Those who know me well will also be aware that I have never written a blog post in my time 15 years in this industry, so I suggest you pay attention!  This warning is not just about Football index, but any similar “Perceived Value” gambling/trading product in the marketplace that works in a similar way.  These are my personal opinions, and should the powers that be at Football Index wish to have a discussion and “Enlighten me” on anything that is factually incorrect, I’m all ears as the intention of the article is not to mislead, but educate.

WARNING: This is THE most deceptive/dangerous gambling product I have ever seen!  If you want to lose a few quid a week in a fun fantasy football game, enjoy it.  However, under no circumstances put any significant amount of money in there.  If you have any significant money in there get it the [email protected]*k out now, as the risk of losing it all is significantly greater than you perceive.

A few weeks ago, Caan was requested by his users whether he would use a relatively new gambling product that has been going for a few years and become very popular called Football Index.  So Caan looked into their product and T&Cs and produced a damming review about why he wouldn’t touch it with a barge pole.  In the weeks since he has received considerable abuse from some rather unhinged people with significant money in this product, which I was vaguely aware of.

One of the damming terms in the T&Cs gave Football Index the right to change the terms of an open bet on 30 days notice.  The closest analogy I can compare this to is if at the start of the season you made a 4/1 ( 5.0) bet on Liverton to finish top 4 in the premier league this season, and 30 days before the end of the season when Liverton is in 3rd place, the bookies change the bet terms to “Top 2” or reduce your odds to evens. (2.0)

If bookmakers started doing this, punters would go into meltdown, yet somehow everyone signed up to it, and the unhinged disciples in their community were trolling Caan saying it would never happen.  Last Friday, it did and as you can see from TrustPilot, some customers got significantly burned as their bets became worthless overnight. 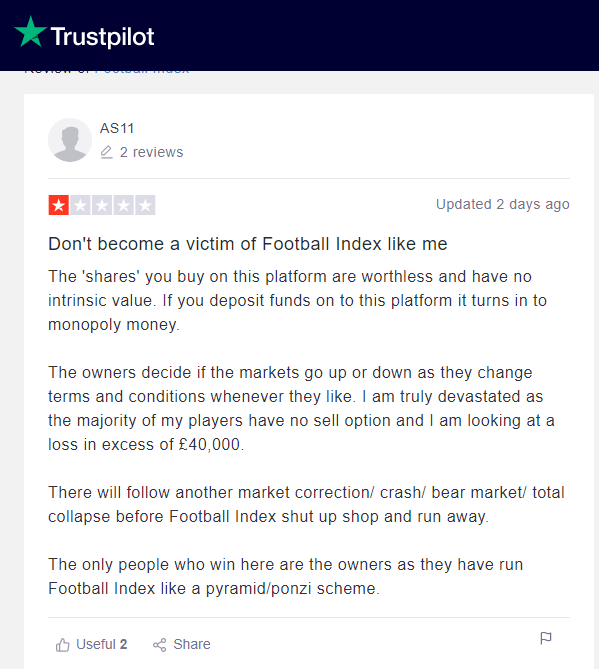 Caan did a video about it at the weekend and again received abuse from some rather unhinged disciples.  As we’re in lockdown at the moment and I have a little time on my hands, I popped on Twitter and started a little troll baiting, and over the course of the last few days have looked into the mechanics of the product.

Quite surprisingly, it’s not their outrageous, unfair T&Cs that has me seriously concerned!

Caan was correct, the T&Cs are unbelievable, and those alone would have me running for the hills.  What does cause serious concern however is the semi-Ponzi nature in the way that the product works, and why I believe it’s doomed to fail eventually.  I will try and explain the technical’s in the best way I can.

Every gambling product has a payout percentage, which is the average amount the house makes from a game/bet.  This cannot be greater than 100% as otherwise there would be no business.  So for example on a 90% payout percentage, on average for every pound wagered, the return is 90p.

Some well-known payout percentages for each game bet are:

Of the gambling products above, only an idiot would play the lottery, right?  But they do so because of the one in x million chance of a life-changing prize.

Now, whilst I don’t know the payout percentage for Football index, I am going to make a rough guess based upon 2 pieces of information they have placed in the public domain.  The first is an investment pitch from them on Seedrs. 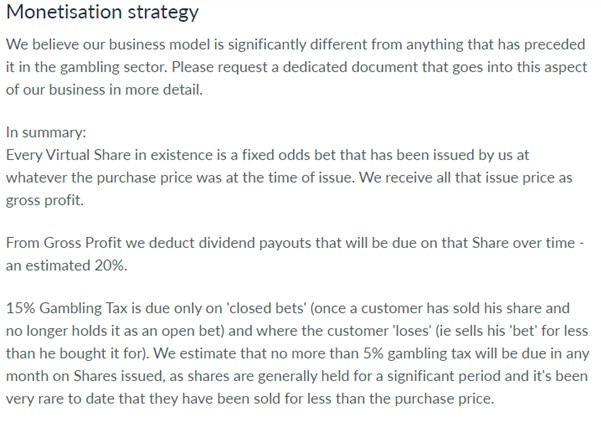 And the latter, a market update from March 2020 showing their dividend payouts. 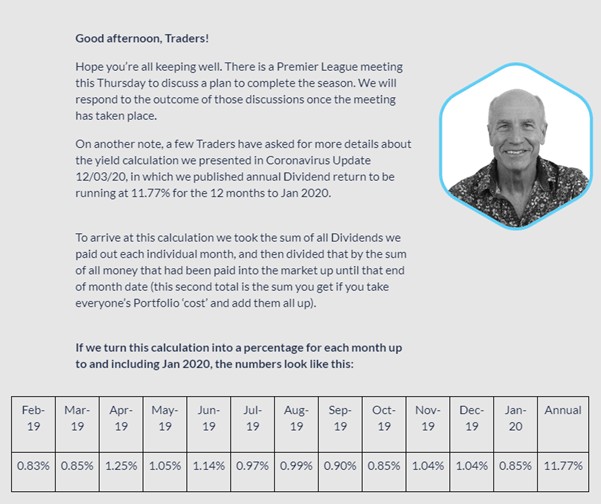 However, they are not expiring these bets after 3 years I’m advised, which could be related to the gaming duty avoidance they mention in their investment pitch, so the true number maybe a couple of % higher.  But let’s be generous and say 40%.

Effectively that means if you buy a £1 “Share” in player “Joe Average” his true value is actually 40p.

This makes it the worst gambling product return ever, why the hell would I play It?

The answer to why you would play the worst returning gambling product ever lies in the fact they have cleverly created an artificial trading market in the shares.  The trading prices on this market fools it’s customer into thinking their balances are real by showing them a {sometimes significantly } overstated  valuation based on the price they can achieve if the sold them, and like any market, the price is driven by supply which causes the price to drop, & demand which causes the price to rise.  In this market, Football Index they are constantly adding new shares in at a price level of £1 and above for Joe Average whenever there is increasing demand.

This is caused by 3 separate factors, the first 2 are defacto in the gambling industry.

The third and most dangerous, however, and what has been the biggest driving factor in the spectacular growth of Football Index until 2020 is the artificial value in their “Monopoly Money” market.  As mentioned earlier a market is based on supply and demand.  If there is demand in the market, the price rises.  People have seen the perceived success stories of others and bundled in causing the prices to rise.  The more prices rise, the more people bundle in thinking this is the best thing since buying Tulips in 1637.

Football index has cleverly kept the true scale of demand hidden by selling considerable shares in “Joe Average” at a price of £1 or above but letting it rise enough to keep demand flowing in, and will do anything to stimulate the market.

Customers, who do the occasional football bet, who wouldn’t usually put money into a gambling product are putting thousands of pounds into this sure thing. { I have even seen 6 figure portfolio balances doing the rounds. }  Everyone thinks they are winning, when in fact the complete opposite is true. “Joe average”, who is really worth 40p has been changing hands at ridiculous prices, and Football Index have been creaming it in selling millions of shares in him at these over inflated prices.  They will do anything to push demand into the market.

But, like any bubble the model is flawed, and eventually, it will burst, especially this one as the true value of the share is actually the asset behind it, which in Joe Averages case is 40p.  For the product to work, the operator needs to mint a certain amount of new shares every day and sell them at more than they are worth. {Operating margin & profit}  As they become bigger, they have rising costs and need to sell more shares into the market.  The market also increases in size, so even more demand is required to service the illusion that Joe Average is worth more than the 40p he is actually worth as a percentage of the market cash out their winnings.  They also need to stimulate demand in the market so the advertising budget also increases significantly.  This is unsustainable.

The best way to explain it, is using the ‘R’ number of a virus that everyone has become familiar with this year.  COVID had an ‘[email protected] rate of 3 when left unchecked.  This led to a doubling of cases every x days, and would have eventually infected a significant chunk of the population.  However, what happens once a significant percentage of the population has been infected is herd immunity kicks in and the R rate decrease.  Effectively, supply dwindles to negligible.

Why I believe the business model is doomed to ultimately fail, is that for the product to function and the illusion of value to be maintained, is it requires an exponential increase in supply and demand, which will eventually run out.

And when it does fail, there is going to be absolute carnage as people wake up one morning to the realisation that their monopoly money is worthless!

But Football Index is regulated by the Jersey Gambling commission?

They are indeed, but it is my belief that they and the UK GC don’t understand the mechanics of the extremely complex trading games.  At the point the penny drops they will demand the companies involved to cease trading.

My funds are medium protected, right?

Wrong.  Only your cash balance is medium protected. Whatever that is. { Unlike Belfair where it is fully protected. }

Your virtual monopoly money portfolio will be worth zero, zilch, nada, If / When Football Index go under.

COVID The beginning of the end?

Ironically, football shutting down for 2 months in 2020 exposed the weakness in the business model.  {  I say ironically, because I believe this is going to pan out as the biggest betting industry scandal ever, and it was COVID that stopped it becoming any bigger.}

Demand slowed because there was no football, and people wanted to put their “portfolio balances” to other uses.  This for the first time created a net outflow from the market that football index couldn’t service so they pulled their “Instant Sell”.  So as of that date, you can’t get out of the market unless some other fool is prepared to take the monopoly money shares off your hands.

This has caused an overall decline in the prices as in the past months supply is outstripping demand, revenues are a fraction of the pre-covid days and Football index are franticly doing anything and everything to stimulate the market.  Reviews are appearing all over the internet of people losing thousands on the product,  which is driving further negative sentiment. { Even though the reality is they lost when they bought into it }.  They have considerable sponsorship deals to honour, running costs etc, and the only way they can raise additional cash would be to mint more shares into the market, thus causing further supply and pushing the price down further.

Every promised new project has failed to materialise, the man at the top has gone, and they’ve pulled the rug on one of the dividends with no announced replacement.  Will they survive 2021, maybe but I believe the can is just being kicked down the road for an even bigger scandal at some future date.

At whatever time they do go bang, the governments need to also shut down these other “Perceived Value” gambling products, as the same pyramid bubble will be inherent in their models too and they are the most dangerous gambling products I have ever seen in my life!

45 thoughts on “Is Football Index a Ponzi Scheme? The Emperor Certainly Looks Naked.”