…but important to accept 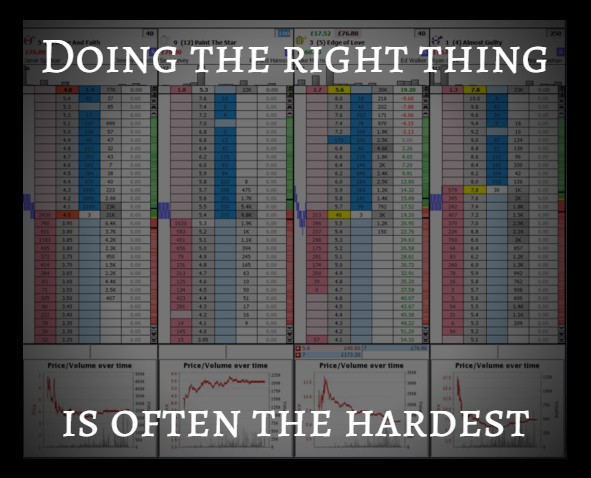 These are all common questions that are asked, understandably so. Everyone wants to know if it’s worth putting the time in to learn something new, but that kind of thinking really doesn’t help.

In the modern world (for most) it’s a consistent belief that your time is worthy of a consistent rate. But is it?

It’s not surprising to think like this with jobs paying an hourly, daily or monthly rate. Or if you pay for a service, you often pay for it depending on the time you received it for.

Trading is the complete opposite. Admiring it and accepting it is pretty important, but not an easy task with it being the direct opposite to what you’re used to.

Setting hourly and daily targets in particular is likely to be counter productive. Why? Because it will effect your behaviour, meaning you stake or choose trades for the wrong reasons. I’ve lost count of the amount of times I have done this in the past, and so that extra £20 I wanted to make (to get to a nice figure for the day) ensured a loss in the last race. Have you done it too?

Hence the title, it’s hard to accept at times but its important to just do the right thing in the moment (and ignore the profits).

For those of you that aren’t from the UK. We have a saying here that goes “you can’t teach and old dog new tricks”. Which isn’t entirely true, although the point is it’s a lot harder to learn something new when you’ve been used to something else for so long.

If you’re looking to get a certain monetary value from the markets by a certain date it makes adapting a bit harder. Just like all good goals it’s great to have a specific idea on what you want, but in this case it’s probably best to cover-up and forget the balance. If you’ve read a long way back through the blog, you’ll know that some time ago I made a link between not watching my balance and profits. By reducing, or forgetting about the expectations I find my overall decisions are better.

Realising it’s possible to make and lose a lot of money in seconds is important too. It’s not the drawn out money-for-time game that so many other jobs require. That’s often the attraction that brings so many into trading, although once they start to learn about the markets it’s forgotten!

As a trader profits will always fluctuate, on the plus side, the markets bring far more potential than your average job.

Trading when the markets turnover is at its peak is ideal, depending on how you like to apply yourself. With added volume I find it easier to trade with larger stakes, it allows me to limit the amount of time within the market, and makes life easier to exit should it go wrong.