At last I’m starting to feel better again, not completely over this bug.

Hopefully tomorrow I’ll be back in peak condition…

The last couple of days I’ve pretty much just slept all day and night in between being ill. It’s given me a bit of time to think about the markets and watch the prices move from morning to afternoon without the added intent of placing any bets though. This in itself has been interesting, it’s led to me looking into some things more than I had previously. Probably because of the not placing any bets bit.

Longer term trading is something that fascinates me a bit more (and by that I mean longer term than ten mins before the start). 90% of the entire matched volumes is within the final ten minutes making things tricky although I think there has to be some good potential on offer still.

Just not through turnover… 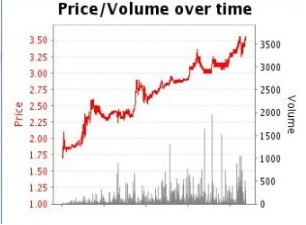 For example recently Holywell ran a mediocre race and was priced at 11.5 for the 2015 Gold Cup prior to the start. I was tempted to open a Lay position although the idea of having a size-able stake invested at 12 didn’t really appeal as I don’t often operate a huge bank like some. That said it’s now priced at 14.5 and would have been some easy money.

Being effective at long-term swing trades from the evening before/morning leading up to the afternoon is of great interest.

The problem being; early on there isn’t always that much to get matched against.

It would also do the mental outlook on the race in hand no end of good to turn up well in the green. I sometimes place trades in the morning early to profit as the morning develops but in the coming weeks I hope to develop more of an angle. At this stage it’s not that efficient.

The thing that I find most fascinating with this approach is that some horses seem to have very little support in relation to price. Which leads some wild drifts. There’s something I’m missing though, yet to find the final piece. The hardest part at this stage seems to be understanding fully when the true volumes arrive in the markets.

I also suspect that different influences coming at different times can sometimes skew results of what could be a profitable strategy in the making. Any feedback on this kind of thing from those further down the path than me is always welcome!

Long-term trading has to be one of the best time/value ratios when it comes to making a profit I would think. Trading in the final ten minutes is great, but being able to walk away and then back to profit is somewhat more-cool.