One month on from the start of the ‘final challenge’ for the blog and its been rather pleasing to be honest, thanks for all the responses on the last post and the poll! Was good to hear some feedback, looking back on it i think their was some good points in their particularly if your starting out… since cheltenham things have changed some what, for the better so it seems which is pretty cool, i think alot of it is a direct product of the last post and how i view things and have been behaving…. other than that i don’t really know what else has changed, i think its good to know exactly what your edge is, and as i said in a post last year execution is everything. 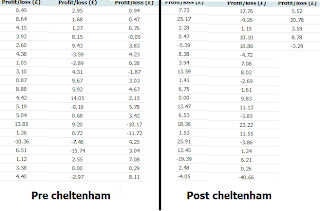 As you can see, a little change in consistency and stakes has made some big differences! The down side to this is you have bigger losses although i feel more equiped lately taking them when i know i can make more in general.

The last two days i think the markets have been a bit frantic which has dented the P/L for the month which is a shame as it was starting to gather a little momentum for march.. yesterday costy me £130 and today i was looking at a £96 loss after the first two so i just went back to smaller stakes and worked into it as i may have been a little rusty with the weekend away from the markets too, was rather happy to finish just over a tenner down. Can’t say the losses have bothered me particularly which is a good sign. I’ll update the chart on the side when i get chance although i think for the month after the ‘plips’ im on a little over 12% of the way.