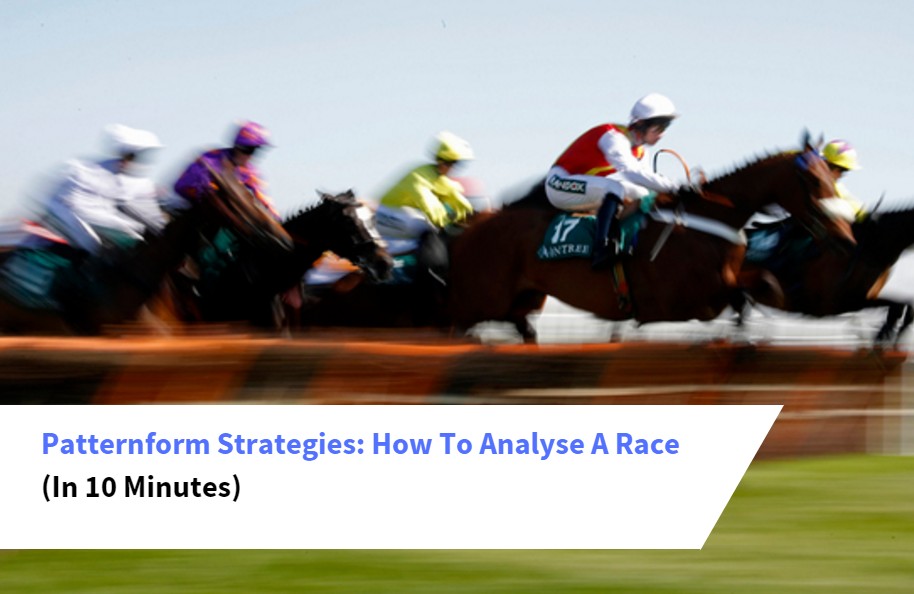 Winning analysis is rarely a ‘quick job’… Using the best tools on offer will speed things up though.

Having a method to refine selection in the early stages is really useful, Patternform allows you to find what you’re looking for within minutes.

I’ve used Patternfom for years, in this post I’ll take a look at:

How to use Patternform Successfully:

Before we get cracking, if you haven’t heard of it before:

To myself, as a trader on Betfair that’s quite easy. Although if you’re coming at Patternform from a straight punting angle, you might be looking for slightly different things. Either way, using it is much the same.

Generally I look at two of them, although can see the benefit in all three. I’ve found the best way to use Patternform cards is through their dobbing overview cards and Patternform cards (the main feature they have).

It looks confusing at first, but it’s really not.

If you look at the image below, you’ll see a specific horse race. After selecting the Patternform cards feature, you have the ability to select a particular race. This is what it looks like:

You’ll see various speed ratings and detail like the age and weight of a horse. As useful as it may be for punters, this doesn’t particularly interest me.

The interesting part for me, begins when you have the ability to filter said horses (on the lower half of the image). Take a look below, purely as an example I’ve filtered the ‘race distance’ highlighted to 12 furlongs. After doing this you just hit re-run. The Patternform card will then re-sort the horses within that race, displaying their percentages and times run over that distance previously.

Have a look below…

Having the ability to sort the runners like this can be useful when trying to see if it’s the first time a horse has been run over that distance, track, going etc. The quickest way to be honest, far quicker than sifting through the horses runs one by one.

You’ll also see in the top right – there are pace cards. An additional add-on that shows in-running data for each horse. Helpful, as longer followers will know.

When you think of the conventional way to look at horses ‘form‘ like how a racing post race-card works. Patternform provides a far quicker solution, another interesting way to look at things is via filtering the weight carried in a handicap race.

If you’re not sure how handicapping works. I’d recommend reading this article after.

Next; How to use moneyform cards…

A bit different. Moneyform cards are quite simplistic, but effective when used with other tools.

Lets take a peak at the very same race as mentioned above with the Patternform cards:

In the moneyform card above you’ll notice a few things; A selection of coloured numbers and a DOB %.

The numbers express a range at which the horse traded at in-running. The * expresses a win, or at the very least a 1.01 gubbing. The numbers representing the price band above it which it traded at (lowest) in-play, 9 being anything above. The overall % is just that of the total runs, how many times did the horse half in price – Gibbs Hill did 100% of the time for example. Useful to know.

The colours are just a representation of if the horse went double or bust, and to what level. Red being the best and green being the worst – backwards I know. A green number means it still halved in price though. If you’re not familiar with the term DOB, there’s an explanation as to what Dobbing is here.

Moneyform cards are best used to confirm of deny a selected front-runner or selection suspect will shorten in-running.

These type of cards come around before moneyform cards. To be honest they’re exactly the same, just with a little less information on offer. You’ll get the percentages at which each runner has dobbed at historically.

Not a huge amount extra to say about these, other than I don’t really use them. The others provide better quality info.

Ok, so now you know what it is, and how you to use Patternform – it’s time to think about various Patternform strategies.

There’s much discussion about strategy on the Patternform forum. Most seem to centre around the same thing – getting a significantly shorter price in running. Not so much the other way around.

Because it’s just logical. When you back at a higher price, the numbers are in your favour (for large erratic price movements in-play). Where as, laying in running is dangerous… liability often exceeds the potential return, unless you’re being extremely select and targeting short prices. Or horses in the final stages. Nobody ever made much trading by having more risk than reward, therefore it’s best to either back at a high price in-running, or lay at a short, odds-on one…

The other popular topic seems to be Patternform speed ratings (shown on the cards above). Speed ratings are probably more for the punters as I haven’t seen any direct benefit in this as a trader. If you do, feel free to comment at the end of this post.

So what’s a simple Patternform strategy?

I’d advise coming at this from two angles:

Most will be familiar with the front-running notifications I keep and post up on social media from time to time. This is one way of keeping track of horses that are likely to trade shorter in-running, there’s more on that within the video pack though.

Another point would be to bear in mind is the horses in-running profile. I know others have Patternform strategies built around ‘strong travellers’. Some horses often appear to be going very well within a race, to then only fade away quite quickly at the business end of a race. To in-running punters and court-siders it may seem like a strong contender, but having the hindsight sight to know his happens again and again with a specific horse can be useful.

At the other end of the spectrum, you could develop a Patternform strategy around those very same horses, except stealing some value late on. It’s been some time now, although years ago there used to be a guy that posted on the Geeks Toy forum regularly about this. His strategy would be to select horses that traded very low in-running, offer a bet outside of the pricing with the tick offset feature. As the price spiked low, in an odds-on range, the lay bet would be matched with limited risk before the closing back bet was placed seconds after. Obviously this Patternform strategy would still require some race-reading skills too…

Hopefully this post was of use, for anything extra the Patternform forum has some useful posts on it! Please feel free to share this post about…

Related Article: What is Dobbing? How Does It Work?

One thought on “Patternform Strategies: How To Analyse A Race In 10 Minutes…”