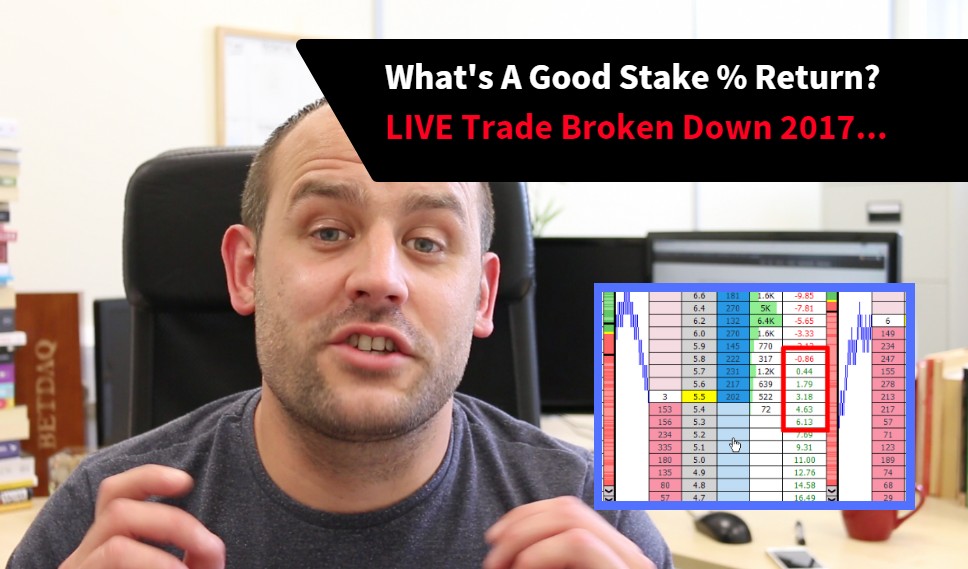 The Q & A has been ticking away just lately and I’ve answered a couple of questions I find frustrating.

One that seems to keep cropping up is around bankroll and staking. In particular – ROI (Return On Investment).

In this post I’ve created a clip to highlight my answer, and then broken the trading down for you. I know some find the old YouTube screen-recordings harder to digest (mainly because there’s less annotation and explanation).

Here’s a new trading based clip for the Q & A…

Some video caption For some, that may have moved a little fast. In order to make sure you get the most you possibly can, follow the steps below:

A quite Sunday afternoon after a busy Saturdays racing. I’ve highlighted two things. First, the time until the start, six minutes it a little early to be trading in most cases (excluding those with irregular activity) while there is only £96,572 matched in the market – hardly a popular race. Observation is key, the first thing to do is relax and start to interpret the information… 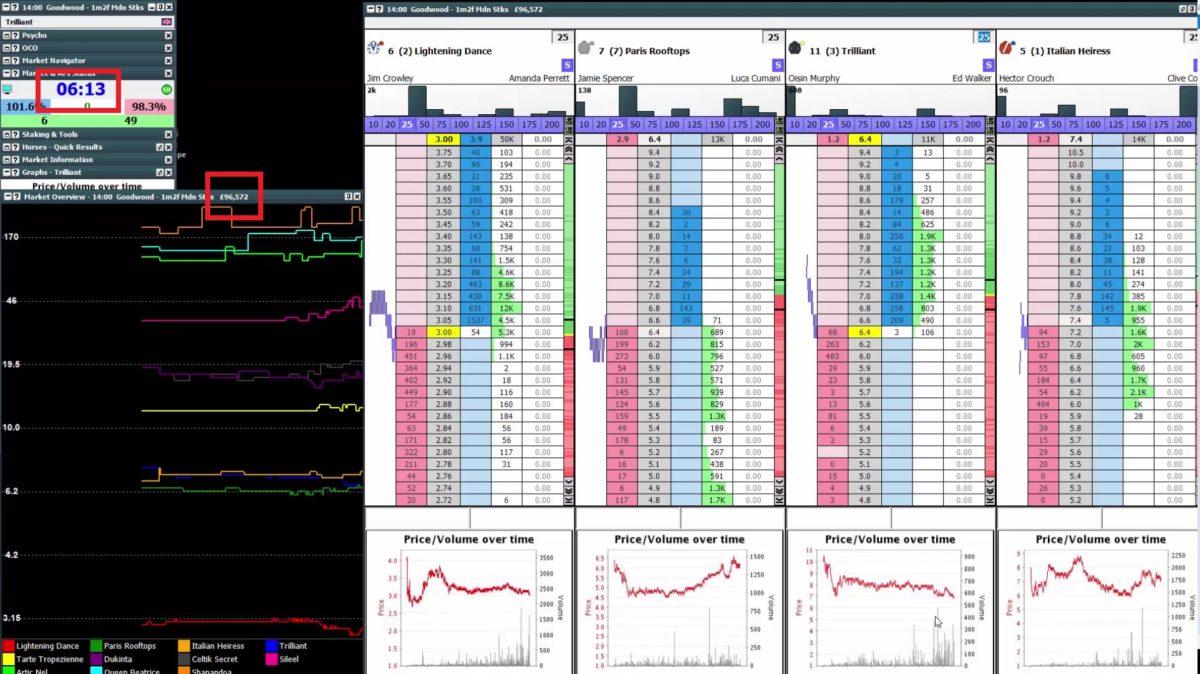 Next I’m scanning the Betfair charts and graphs (video about analysing them here) to see which horses are of more interest than most – within the market. In this instance I am focusing on the two that head the market. Volumes highlighted on the chart below… 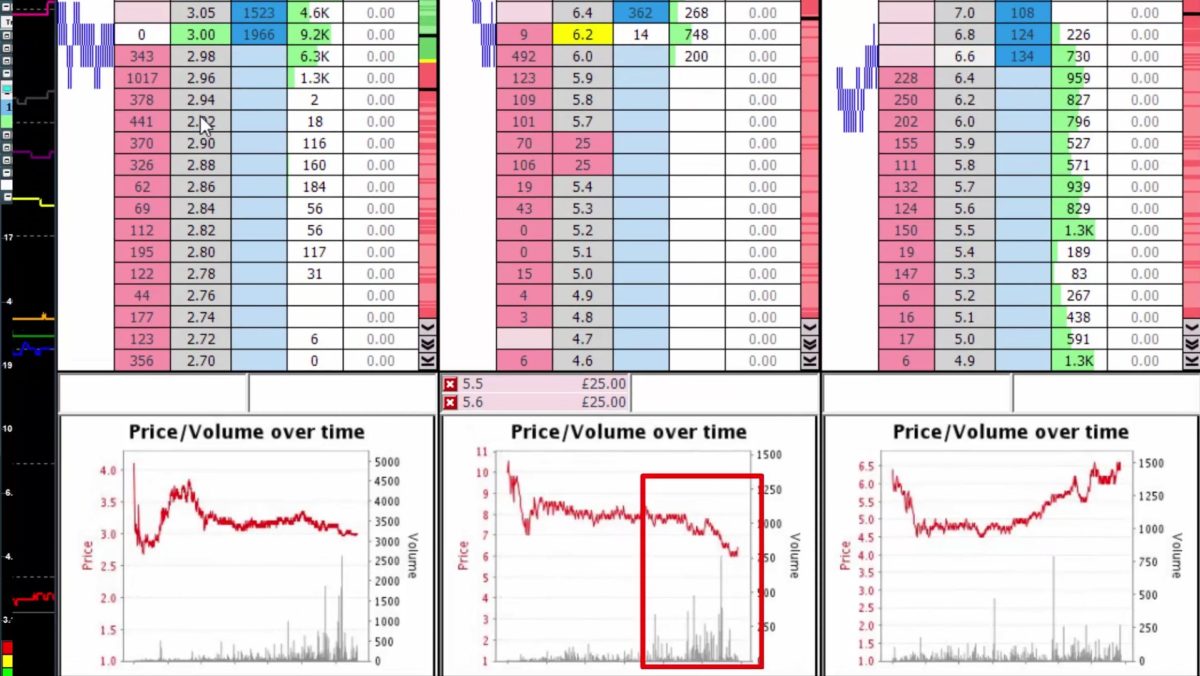 The initial assessment is that; the third favourite is weak within the market. More so than it’s price may suggest. A speculative £25 trade is placed on the lay side of the book because of this. Furthermore, the two market principles ahead of Italian Heiress appear to be relatively well supported thus far. It’s not a solid decision, although at the time of placing the trade is right. Many good trades start like this and are built upon as they begin to move… 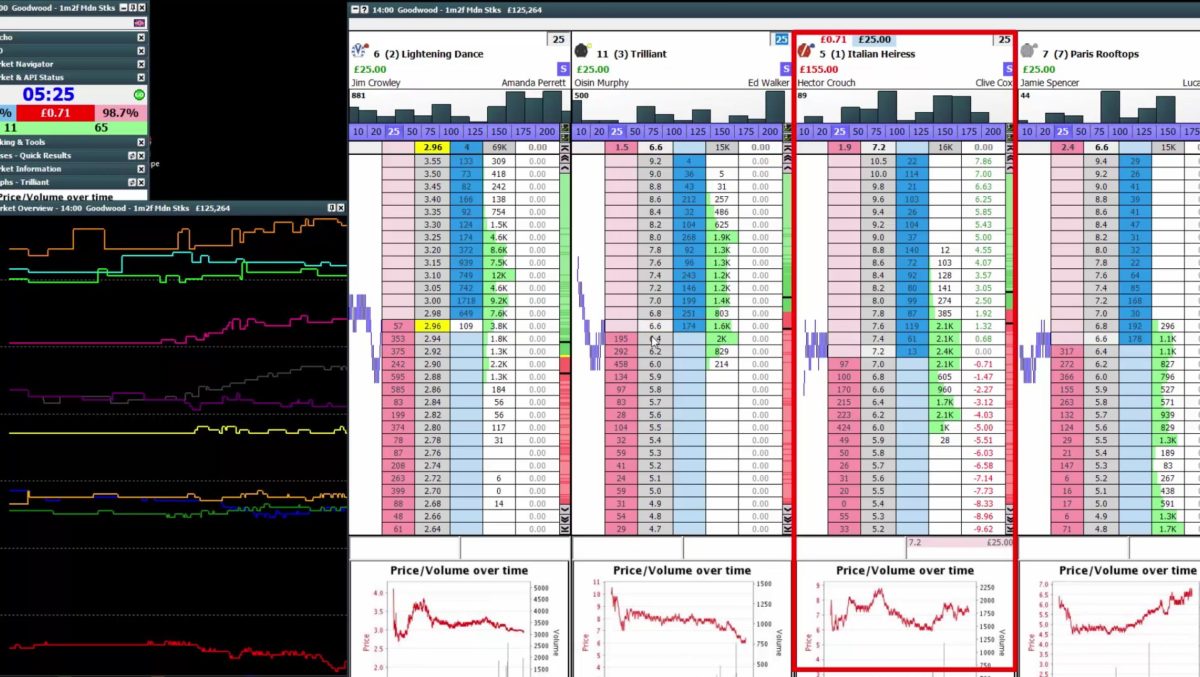 Having opened a trade, it’s always good to have an idea of where you want to exit (worst case scinario). For me, in this instance, the potential exit sits at 6.8. Why? Because it’s just below the last point of resistance in the market volume wise and I don’t mind losing a couple of ticks on this trade to find out if it starts to move. Quite quickly it appeared to be one that could drift. 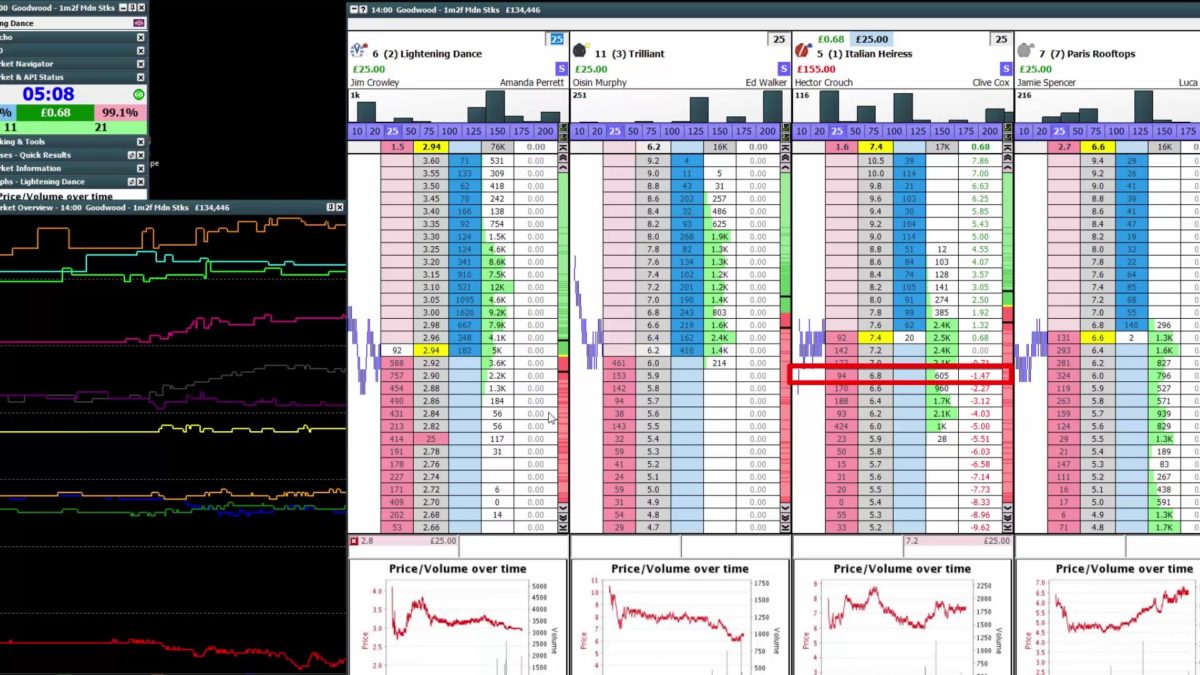 Highlighting my reasoning for entering the lay trade also, I mention that I am looking for sustained market support. In favour of the two favourites (they appeared best supported). The two short prices in the market seem to be attracting some back support in the market at this time. Trilliant, the second favourite has the 6.0 resistance to contend with though. 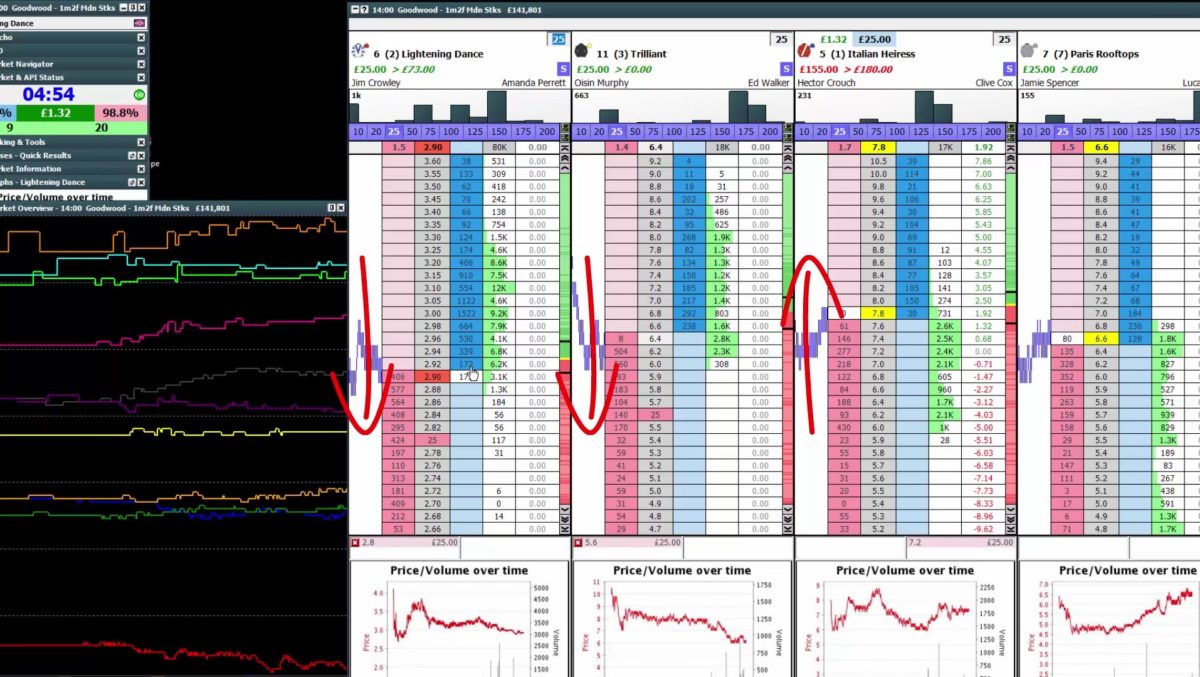 A good point made at this point was; the market isn’t doing anything. So neither am I.

We need the market to do the work for us. I think it’s common that people think otherwise, we have no control over how the market behaves, we simply have to fit in around it. 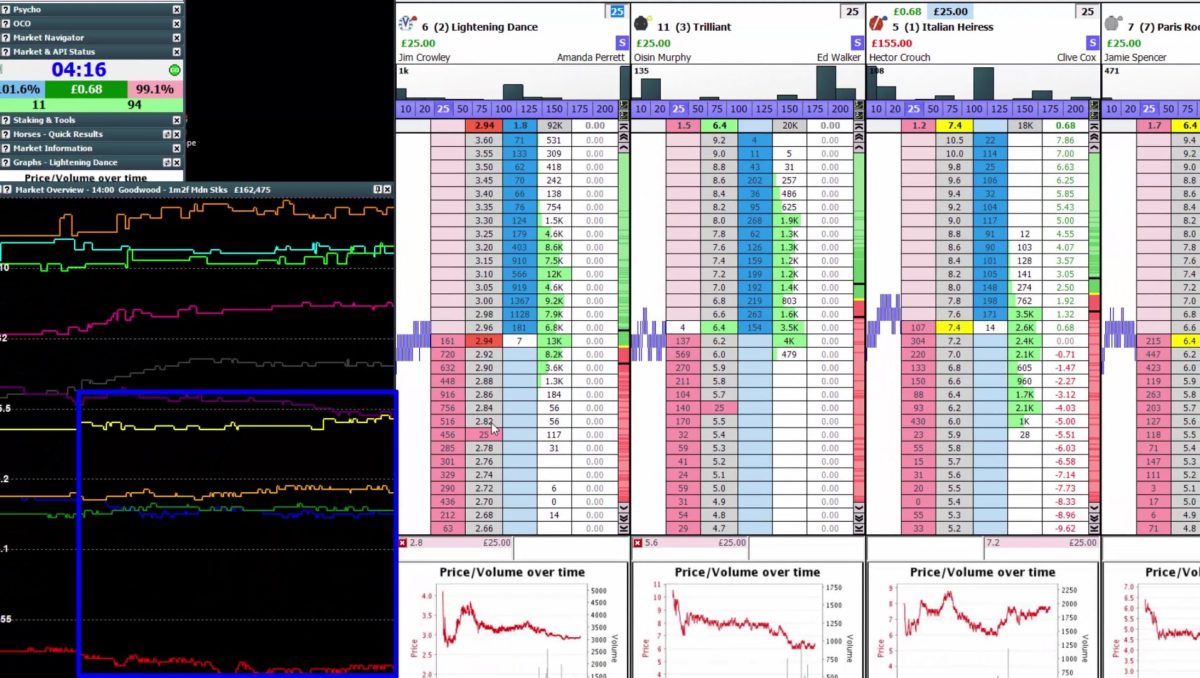 And then a point comes where it appears that, Trillian, the second favourites support is slowing. Meanwhile the favourites support is relatively reasonable. For that reason I start another of those speculative trades, much like the third favourite. Looking to build upon the position should it start to develop. The threat being Trillian in the market, and possibly the fourth at this point in time. 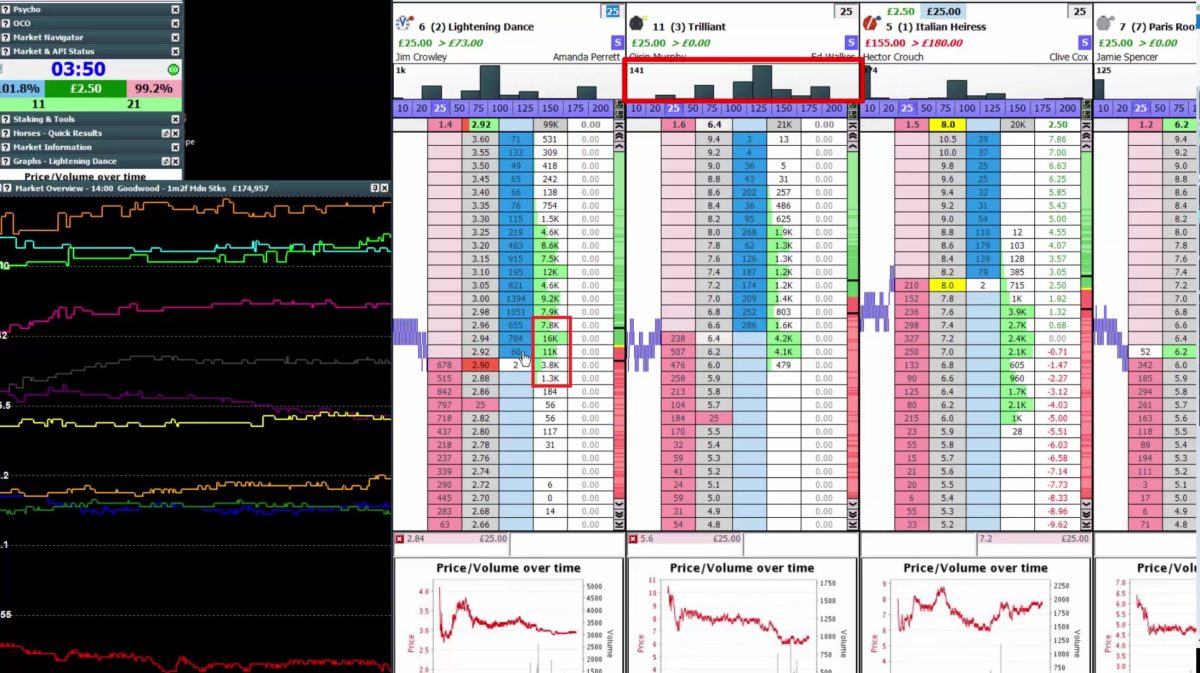 Muted from recording, the commentators explain the favourite is warm at the start. I immediately close my back trade.

Just because the horse is warm does not mean the price will drift. However, I don’t want to be on the back side of the book in such situation (especially seeing it was a speculative opening anyway). The next point highlighted is that Trillian is back down at the 6.0 again, breaking through the previous resistance will be of interest. If the favourite also starts to drift, I am thinking this will support a back trade on Trillian. 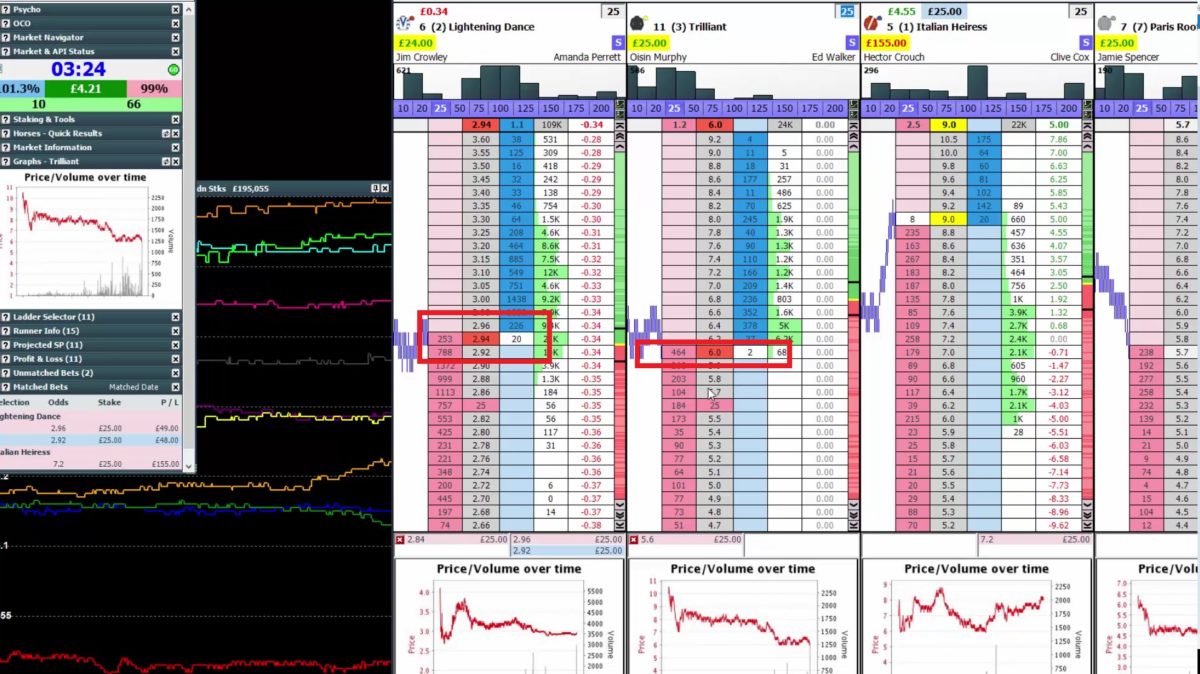 And then it happens; the favourite starts a small drift, and Trillian breaks resistance. My immediate reaction is to open a trade and offset my profit, guide readers will know all about this. By offsetting my green zone I’m left in a position where I feel more comfortable about the open position. Managing my downside. 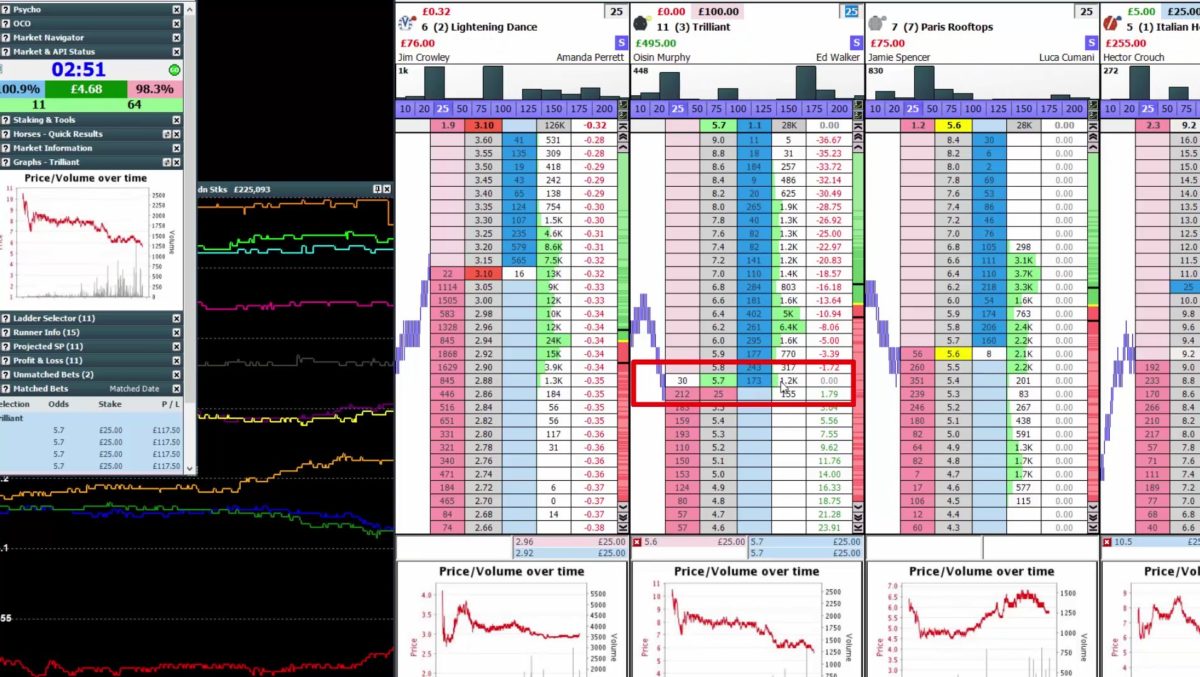 See the profit and loss column. By exiting part of my stake (while the market has stalled) I have successfully made sure this trade is to be a winner. Profit has also been limited, but when you consider the market has already stalled at this point it’s the right thing. Should heavier back money arrive, I would continue to scalp in direction with the price movement. 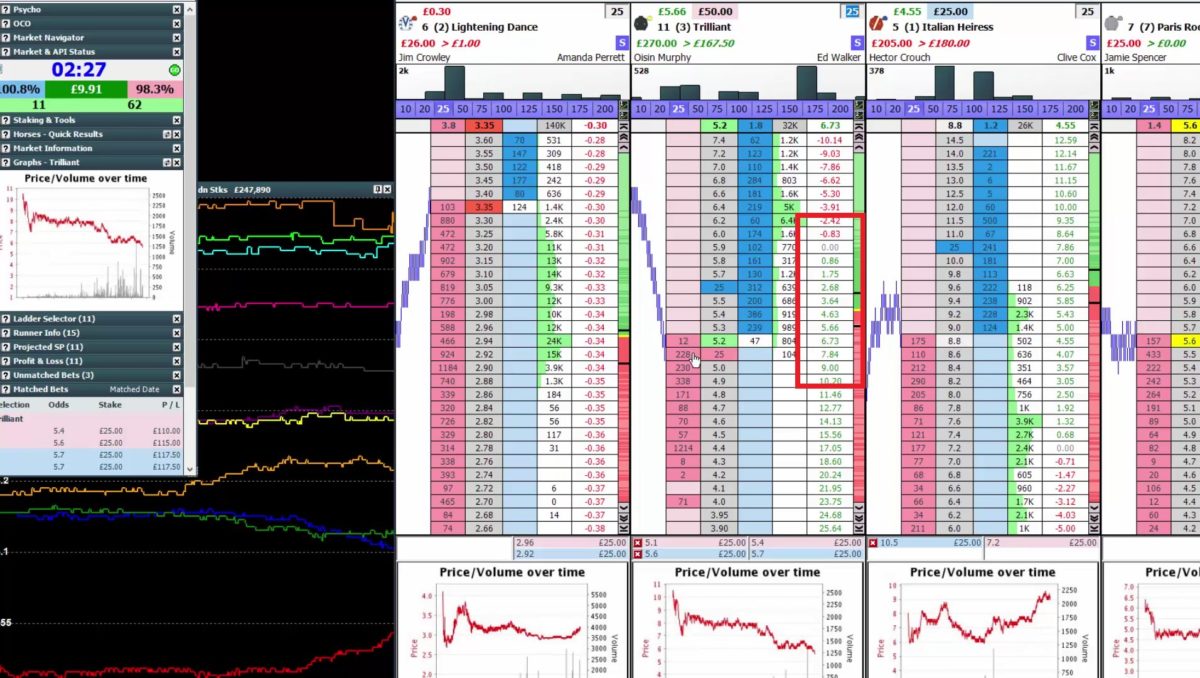 If the price action will continue or retract isn’t so clear right now, and so it’s another point where you have to let the market do it’s thing. Reacting as it happens. By now the trade on Italian Heiress is underway. With there being little to no money for this runner I suspect at this point the exit will get filled at 10.5 for a nice return. 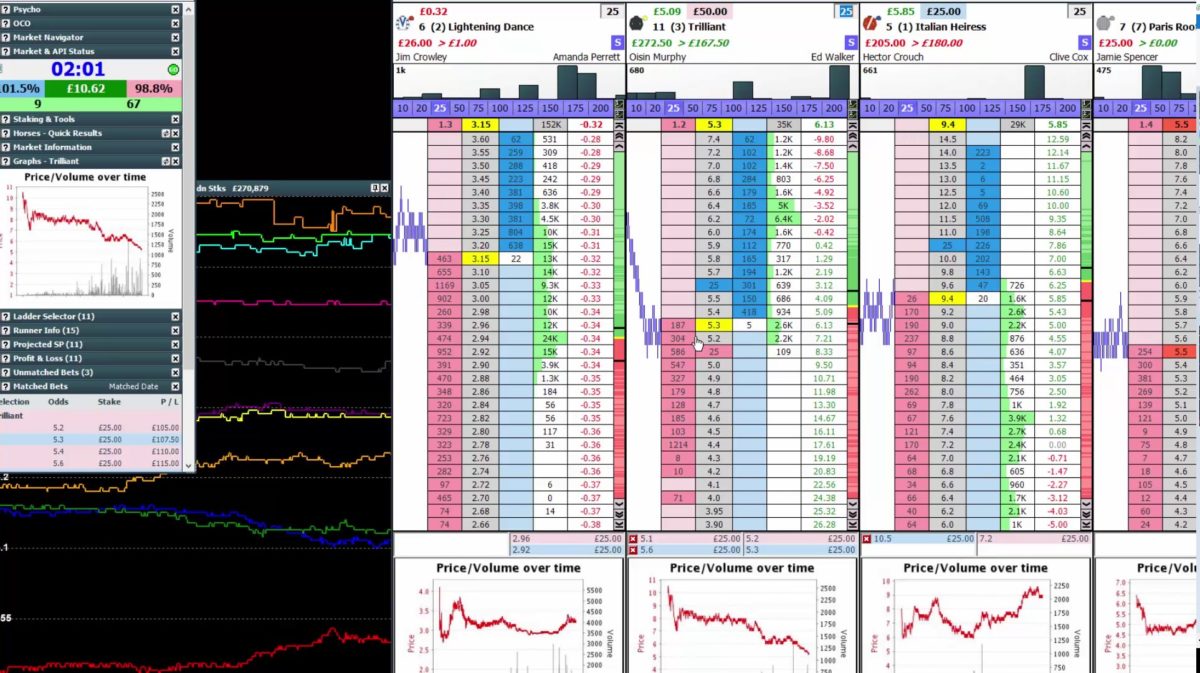 The market appears to have stopped movement. It isn’t clear and so I close out as much profit as I can at that point in time. Before re-assesing the situation for another potential entry. 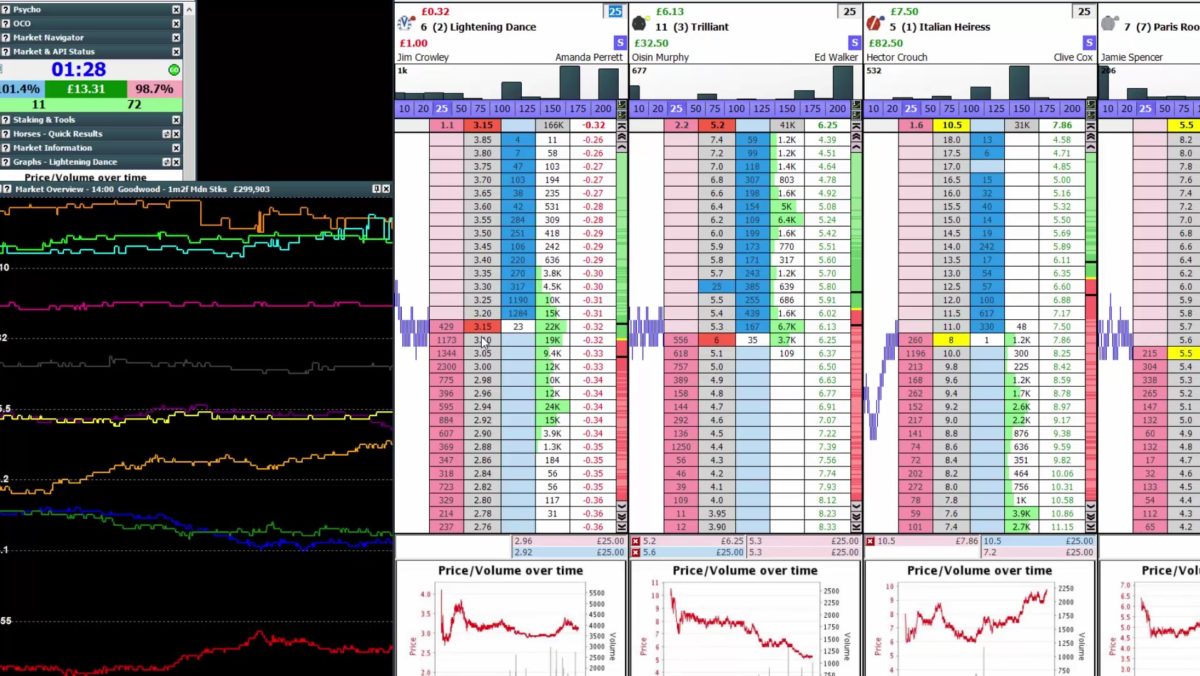 A personal preference is to keep the ladders level. For me personally, I find it helps when it comes to spotting a sharp snap in price (and reactions between runners). I’ve highlighted it with a line on the screen. Hopefully that makes sense…

By now the main bulk of activity is over. It’s clear there isn’t to be a heavily supported runner, making it a bit of a nothing-market. However, there are a couple more opportunities to eek out a couple of extra ticks. Mainly through offering money in the market with pockets of support to assist. A minor mistake made on this one as support doesn’t follow through, taking a quick loss is underrated in most cases. 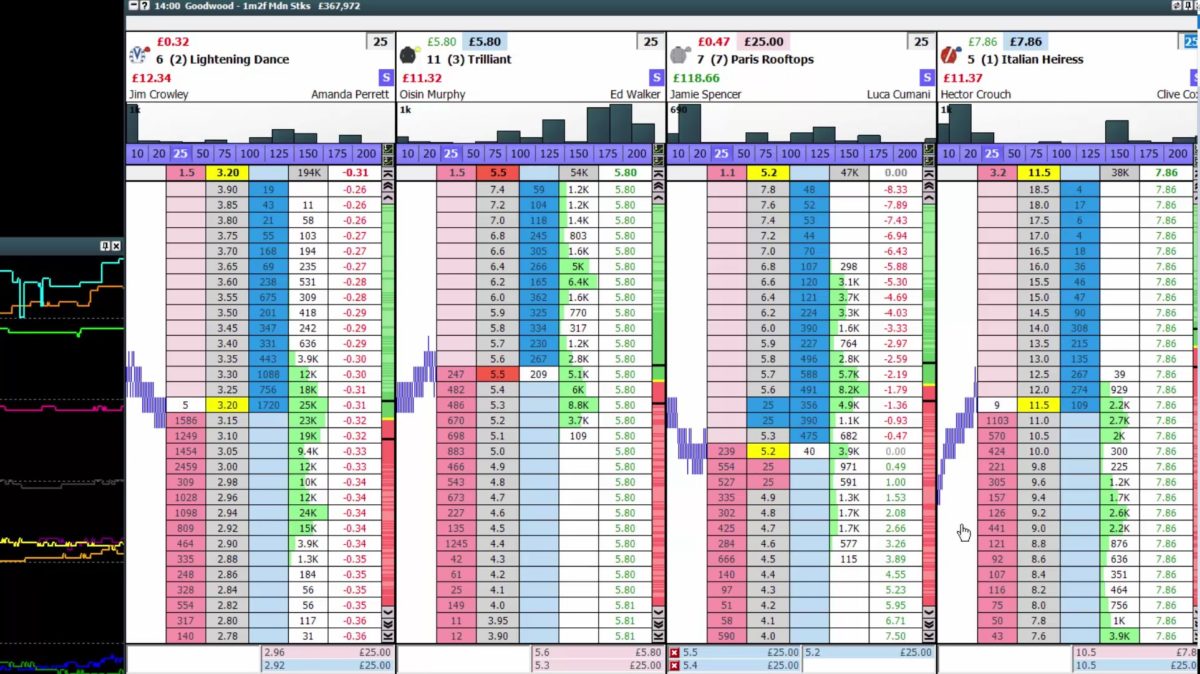 I’ve missed a couple of frames out as they are much the same as the process described previously. However there is one final point to make of importance.

In the last seconds of the horses entering the stalls I have this position. It’s clear, although there not being much in the market that, the runner is taking more back money than lay. And so I have an open scalp. To avoid going in play (totally do not want to do this in this siutaion) I right click my lay bet and select ‘IP SP’ meaning; In-Play Starting Price.

Looking for a little extra? Check out the Video Pack Here.