At Last The Penny Has Dropped!… (I think)

As I thought previously the other week, the penny has dropped!!?! (or so I think it has anyway!)

Could there have been another eureka moment? or maybe this is just the real one?! I don’t know?! It’s so hard to tell at times…

Its ‘just happened’ even more so than ever before… and it’s really not the time of year for it. I’m just struggling to lose so it would seem?!

That sounds terrible and awfully big-headed but it’s not how I feel about it, although from the results and how I’m feeling when I’m actually in the markets (not bothered) it’s all going crazy!!

Finally the fruits of my labour seem ripe to pick! I’m just trying not to get too excited about it just yet, although judged on these last 50 though im thinking I should be going for it full-time. 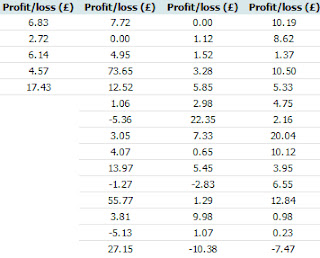 It’s quite difficult not to think like that when results are this good. I’m making more at home than at work if I carry on like this…

I didn’t even realise how well I was going till I went back through the last weeks results, some are from Saturday granted but look at that consistency Woooo Hooo!

So what’s the key? I’m not a 100% certain at the moment, although I can tell a big difference has been my overall attitude and mental approach in the markets.

It’s had quite a big difference on my behaviour. At times I’m not holding back now, which is good. But the added confidence from the consistent wins is also meaning I don’t feel quite so obliged to place bets when things aren’t looking too ‘great’.

I’ve had a look at the different types of situation a little more, purely to lower my losses, which could be helping things quite a bit. The biggest factor has to be how im feeling in the moment though.

Hopefully this continues, right now it seems a little too-good-to-be-true!