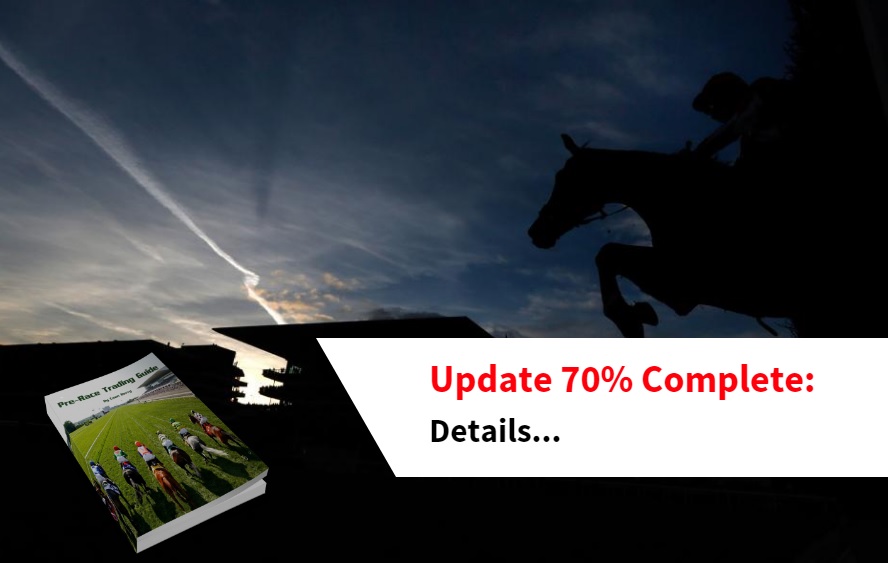 At the end of last month I set about implementing a series of updates to the pre-race trading guide. It’s almost done…

Here’s a quick update on progress so far, and existing guide users can expect (updates on the portal at no extra cost).

I’ve been meaning to add couple of sections for a while now, having taken the plunge with others in user support and website development roles it’s made things a lot easier.

The largest additions to the guide will come in the form of several new sections based around market functions, characteristics and odds. The aim is to leave no ambiguity, the very first version of the guide was aimed at and written for those whom already had some kind of trading knowledge. This time around it’s for anyone, without anything taken for granted.

While upgrading the existing chapters I’ve also noticed space for increasing the depth of explanation, tweaking it to fit the current markets and their behaviour. The aim is to help every single reader as much as humanly possible…

One of the points of feedback from exiting readers was that, a little more step-by-step explanation was helpful. Over time I’ve improved the way in which I convey knowledge and so I’m making a conscious effort to break explanations down so they’re easier to digest. Also a glossary of terms used will be added.

The aim of the guide is to take somebody that’s new to trading, take them from a little exchange understanding and give them the knowledge to tip their results into consistent wins. Much like last months small trading bank challenge (day 1’s results below). Making small, consistent wins is the way to succeed.

Currently there’s around an extra 5,000 words and a handful of diagrams. I suspect there’s a fair bit more to go although the bulk is out the way, release looking like next month.

If you’re an existing guide user, the update will appear on the portal as it becomes available – early October I expect.

Earlier in the year there were a few changes to the site structure. Purchases under any of the Geeks Toy promotions or, from some time ago, may find you have an ‘old style login’. Several emails were sent out to existing users about this.

If you’ve missed them; try logging in to the ‘new style login’ using the link in the header bar at the top of this page. Your username or registered email should let you reset your password via the link provided.

Should you not be able to get in still, drop the user support an email and we’ll get it fixed up for you. But be sure to include your purchase email and transaction ID, we’re not psychic!