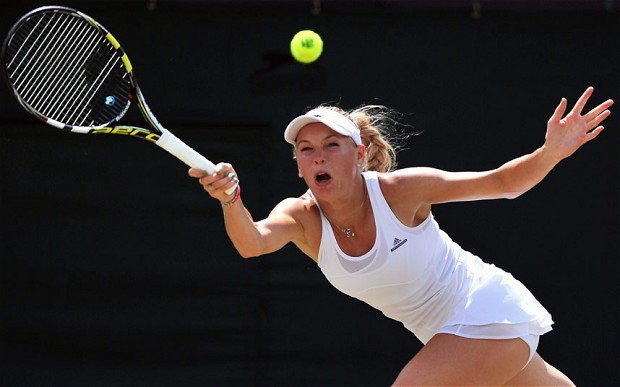 Well… Wimbledon is on and the sun has finally arrived in the UK it seems (British weather is shocking, these years been no exception).

I always seem to dabble over Wimbledon and never really give it my whole attention. Maybe I should… but to be honest I prefer the racing by far, from a trading perspective anyway. From a viewing perspective, it’d be impossible to say the women’s tennis isn’t worth a watch.

The women’s tennis markets can produce some crazy moves, that said this year you’d of suffered if you were playing the compression points on one of my favourite female tennis players… Caroline Wozniacki (what on earth was Rory McIlroy thinking?)

Moving on to round 2 in straight sets seemed like a walk in the park for her, but with a 76% of her first serves to go in and winning 72% she’s clearly on form. Women’s tennis often produces crazy swings due to all the breaks in service. Typically in the WTA games are dominated less by the serve, so when a female player is on their serve like that it’s generally one-way traffic.

However, the racing front’s been a bit bleak. Longtime readers will know this time of year the racing markets seem to drop dead – purely because everyone is watching the tennis. Markets are obviously still trade-able but it’s hardly a recipe for excitement. These ‘lulls’ inactivity are often a good time to focus attention on research into market behaviour. For me I’ll probably do a bit of both, picking select tennis matches and working through recordings and stats on the others.

Have a good Wimbledon if you’re trading it!

One thought on “Wimbledon & the racing while its on…”