Day one of the York meeting for me and as i seem to start on all big meetings the first day wasn’t so good!

In the first race i was overstaking for sure probably down to a bit of York excitement and got caught when a whoping 20k went through the 6.0 barrier with me on the wrong side! … roll on a -£80 start, i managed to claw some of back before post but still it led to me having a really poor attitude in general for the whole afternoon with my results going up and down like a YoYo!

These things do happen occasionally so its no great loss but a bit of a frustrating day on the whole as i got caught inplay.. though my own neglegance and lost another £70 a few races later, determined to finish on top i just plodded along doing only 18 markets in total but finishing on top… today could of been alot better but i think some of it may have been down to having other things on my mind at the moment aswell. 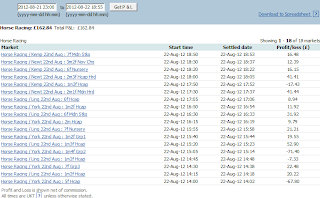 2 thoughts on “York, Day one…. a poor attitude”