After a very heavy weekend i only just realised i hadn’t yet updated for the final day at York on saturday! .. sorry if you’d been checking for the update… litterally from the moment i stopped trading saturday i’ve been out on the pop non stop and have only just got over it… it could be worse i suppose!

I’m not particularly favoured to saturdays due to my trading style at times to say the least but with the hype of York it seemed to be far far worse, it almost reminded me of my first Cheltenham in a way.
On a Saturday betting turnover is always more due to the amount of non hardened punters that like to have a bet while the racing is on Channel 4, this is great news… although not always!…

The reason i say this is because particularly at big meetings it would seem, traders in general much like myself are aware that the ‘fill rate’ is likely to be better, and so they up their staking plan… im talking about the big boys here mainly. Which is fine as their filling their boots doing so although when the ratio of unmatched money to fill rate is out of touch with too much unmatched money stacked about it can be very awkward, particularly if your trying to get any kind of stake through the market… and if you dont try and get a big stake through your going to be waiting a while making it more tricky to get lots of small ones through!! All this is fine, but if your bank is not big enough to have a couple of decent stakes on the layside it can become very infuriating at times to say the least!

On saturday i felt pretty infurated at this sort of thing having a bit less than i usually would to play with which i think in turn effected the way i was feeling!.. To be fair alot of it was probably my attitude although for these kind of meetings i think i need a bit more in the pot to play with, when you can only lay for a couple hundred at 10’s and someone else puts a couple of thousand over the prices it just takes forever to get the bottom of the pile before another order can be put in… providing you didnt have to scratch, this was the reason for the £80+ loss early on in the day.

Still it could of been worse, it could of been a loosing day! … hopefully the break and blowout for a few days will of helped my mindset and i can now get back to business as usual for the last week of evening races!! 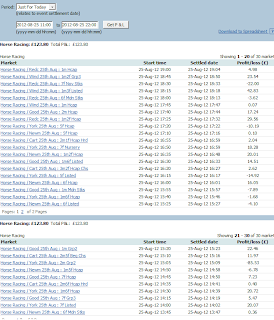 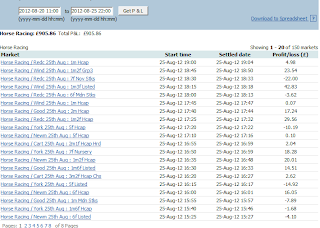