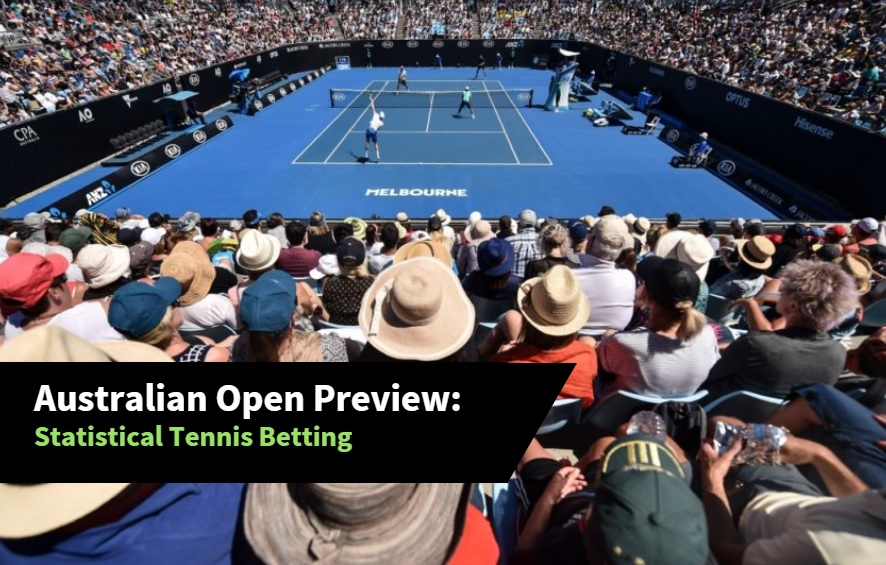 Looking to trade the tennis over the next couple of weeks? If so, here’s a quick guest post from tennisratings.co.uk.

If you haven’t seen their full stats yet, it’s worth checking it out. The founder, Daniel Weston is a professional tennis trader and statistical analyst of a number of years.

Not so long back he appeared at the matchbook traders conference along-side me as a guest speaker. You can find a link to more information and statistics from Dan at the end of this post.

With the Australian Open around the corner, there are nine main contenders currently priced below 50.00 on Betfair Exchange. Here’s a quick-fire overview of them all:

Roger Federer (3.10): 3rd best for service points won on hard court. Around top 10 data on return makes him the favourite to win his 6th Australian Open title.  Arguably the big name in the best condition, with a magnificent record against top 10 opposition.  Without doubt the man to beat in the coming fortnight.

Rafa Nadal (7.00): The Spaniard has had no warm-up on what is not his preferred surface.  However, his underlying hard court stats are still good. Similar to Federer from a service/return points won perspective, and some straightforward-looking early matches promise to ease him into the event.

Novak Djokovic (9.60): Complete with new service motion after a long-term elbow injury derailed most of 2017. Djokovic will be looking to get back to his best, at a venue which has given him many superb moments in his career.  If he can do so, he will make a mockery of his pre-tournament price.

Grigor Dimitrov (13.00): Following Dimitrov’s triumph at the World Tour Finals in November. It’s easy to see why he’s been installed as the fourth favourite by the market.  However, my numbers make this a little ambitious, with his success in London coming on his preferred indoor courts.  Still with plenty to prove against fit, elite-level opposition outdoors.

Nick Kyrgios (14.50): Kyrgios’ talent isn’t in question – it’s his temperament.  The Australian talent loves the big stage, and should bounce off considerable home support. Keeping his head together for seven matches is a big challenge though. Not to mention the fact that extremely serve-orientated players tend to struggle to reach the latter stages of Grand Slams.

Alexander Zverev (19.50): Another young prospect generally loved by the market. Zverev has actually been fairly friendless in this outright market, drifting from around 10.00 in recent weeks.  Statistically, he looks like requiring another gear to test the very best on a consistent basis. His success in the last 12 months has been built on an almost certainly unsustainable basis of winning considerably more break points than expected, based on serve and return points won percentages.

Juan Martin Del Potro (21.00): The Argentine has managed to improve some mediocre data in recent months, but doubts continue about his fitness. Especially when you consider recent wrist surgeries.  Similar to Kyrgios in requiring a decent improvement in his return game (just 35.8% return points won in the last 12 months on hard courts). If he is to trouble the engravers for the trophy.

David Goffin (23.00): Like Dimitrov, made a big breakthrough in London in November, but a 14-36 record against top 10 opponents in his last 50 matches won’t inspire confidence that he’ll be able to get the better of two or three elite players here – something which he will almost certainly have to do…

Marin Cilic (36.00): Many people’s favourite tournament long-shot in Grand Slams. Cilic’s level hasn’t been towards his peak following injury in last year’s Wimbledon final.  However, he does have a relatively easy draw in the early rounds. Making him unlikely to play a top 10 opponent until the quarter-finals, where he’s due to take on Rafa.  It’s just as well, because his record against elite opponents is terrible.

by Daniel Weston
of tennisratings.co.uk