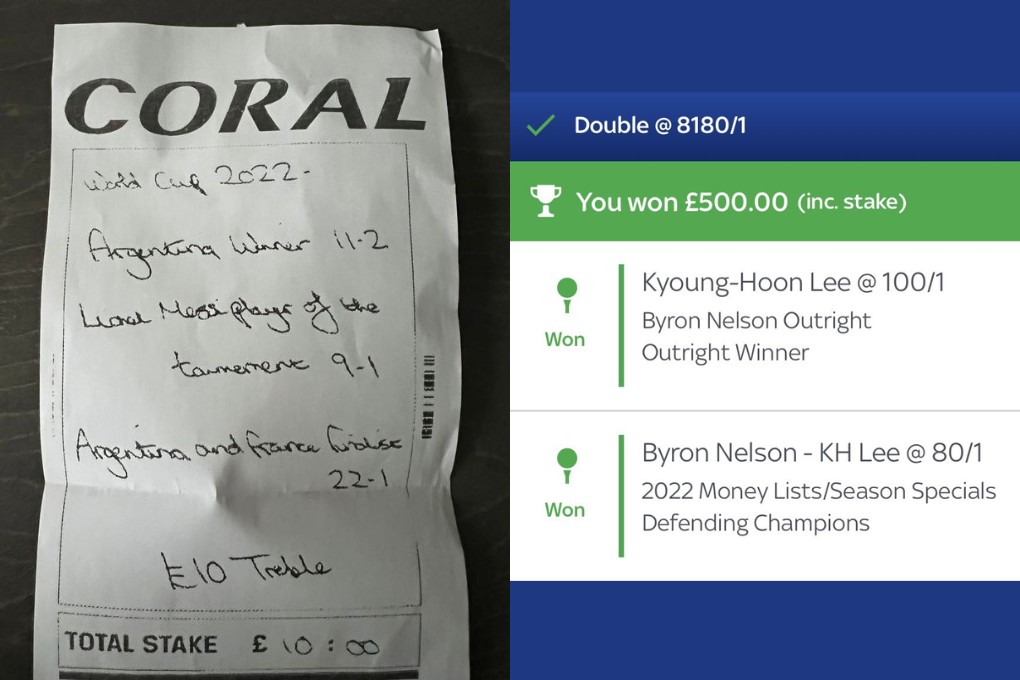 A related betting incident has caused a considerable stir on social media this week. I feel some important points have been missed in the follow-up debate which is quite frustrating, compelling me to write this post. Critical thinking is becoming rare with the rise of echo chambers on social media, so let’s unpick what happened here and why I feel the general reaction should have been somewhat different.

You can read the original article here but this is the betting slip in question. One unlucky punter had placed what they thought was a treble on Lionel Messi Argentina and a France v Argentina final at the World Cup. 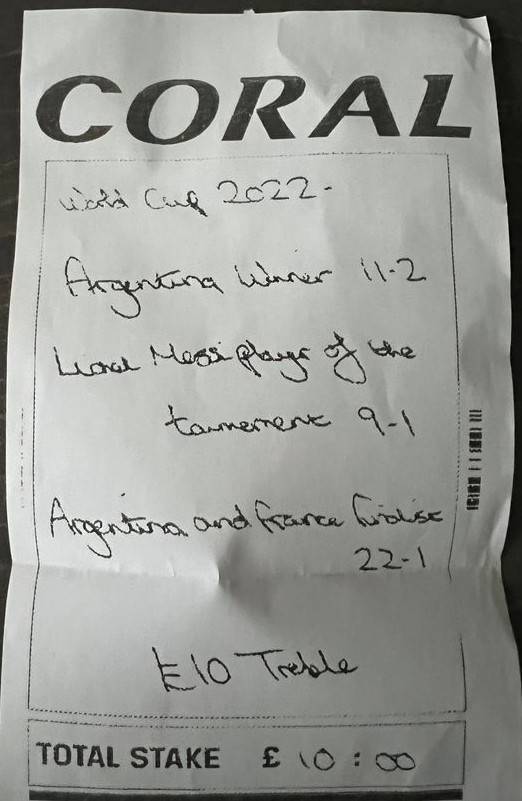 However, after winning, the customer was told that this was, in fact, a related bet. He was told the betting odds written on the slip at the time of placement would be changed offering him just £660 instead of nearly £15,000 (the payout he was expecting).

Now as many people have pointed out this is clearly a related bet. It never should have been allowed in the first place, even though it was by the bookmaker Coral.

What is a Related Bet?

A related bet is a bet with multiple lines that are related to the outcome of another bet, thus changing its overall probability. For example, if you place a bet on a football match, you might place a related bet on the total number of goals scored in the game or on the performance of a specific player. Some bookies advertise these as bet builders.

There are many different variations where this is possible but in this case and it’s considered to be a kind of palpable error because the individual prices were listed.

For those who don’t know what a palpable error is, it’s a ‘clear and obvious’ mistake made by the bookmaker when setting the odds for a particular event. Historically there has been a rule in bookmaker’s terms that say they are able to correct the odds of a palpable error at a later date – for example, if somebody wrote 50 to 1 instead of 5 to 1 on a betting slip.

Where Did Related Bets and Palpable Errors Come From?

When you take a look at where such rules regarding related bets and palpable errors came from, it makes a lot more sense. When off-course betting was legalised in 1960, smoke-filled book-making shops were popular. They were often full of people with an urgency to get their bet on before the start of an event.

Customers firing slips across the shop desk with dodgy handwriting would have no doubt been pretty common. Bookies staff couldn’t possibly know all the different betting events that were on at the time and were under pressure. There was no computer terminal.

Introducing the palpable error and related bet rule was no doubt the most reasonable answer at the time.

Related Bets and Bookmakers in 2023

However, if we fast forward to 2023,  bookmakers have become very large mega-corporations that harvest billions of pounds every year – Coral is an example.

Companies like Coral use advanced artificial intelligence systems and a huge amount of technology to track and trace customers every move. They track your browser with IESnare, your location via IP addresses and device type, they’re using artificial intelligence to identify your handwriting on betting slips, modeling betting markets and watching your betting patterns (even in shop), recording who you are, what you’re wearing and even your car registration in the car park.

They’re known to find any reason to welch on bets in a dishonest and unethical manner whilst simultaneously targetting addiction.

They even use excuses like gambling regulation to profile your bank statements. There are multiple cases where Coral has refused payouts and banned winners in the past such as when they advertised in the Sun newspaper a special bet and then refused to pay out somebody bet on it. Or there’s the time they restricted this betting account after 1 bet and requested bank statements to payout.

So my point is this…

If they have all these high-powered advanced tools and artificial intelligence to hand for the basis of prohibiting winners and avoiding payouts.

Why can’t they record a bet correctly when they accept it?

They put it through their digital till system, they hire and train the staff – and they have millions of pounds to train them properly. I just don’t see the excuse, it’s lame. Furthermore, there’s a consistent theme here. I’ve seen it getting worse and worse from bookmakers over the last 10 years.

…and now, they can choose when they enforce them – even if it’s quite clearly their own mistake. There seems to be no bookie responsibility whatsoever!

If a customer makes a mistake on their bet they lose. They aren’t offered a refund, or to reconsider they’re bet after it has happened. However, if the bookmaker makes a mistake the customer loses too. In both cases the bookie get to keep the money.

It’s just so so wrong.

What’s the point in writing anything on a betting slip if they’re not going to check it, record it and honour it?

Furthermore, where are the gambling commission? The second licensing objective is to insure operators offer gambling services in a fair and open way.

This is not fair and it’s not open, and neither are many of the things these companies routinely do.

These problems could be resolved as one Australian follower pointed out on the YouTube channel:

One can only presume Entain aren’t aware this happens down under (despite their brand names operating there).

Whilst these companies get away with it, they’re just going to continually do it. It makes them more money and saves them on costs. It’s even happening online and via the self-service terminals in-shop, just take a look at these two images below.

For all the people that are quick to point out it’s the fault of some lowly betting staff – what do you have to say about this?

The people responsible for these digital systems are not minimum-wage till operators.

There’s no incentive it’s clearly quite deliberate. The companies have no intention of acting on their core business of providing and recording bets. They’re more interested in getting everyone’s bank statements and profiling their every move.

Once more, to reiterate the point: 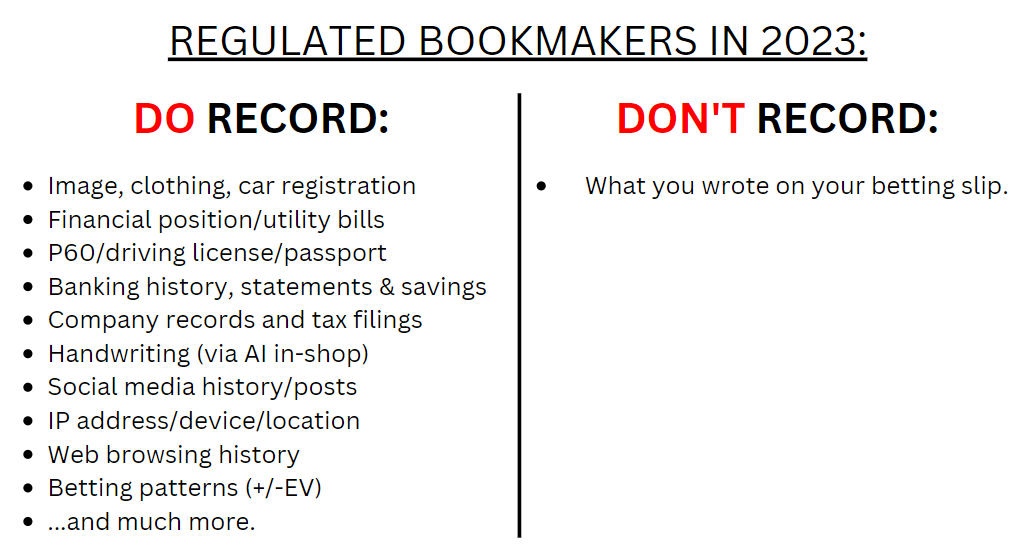 …the bookie sympathizers say they just can’t be responsible for recording what is written on each slip. Spare me, please. The world’s gone mad.

Related: The Dark Side of Gambling Regulation

One thought on “Fair Bookmakers Can Change Your Bet AFTER It’s Won?”