Goodwood is a funny one. The pendulum can swing either way.

In most cases it’s another increased liquidity event, with more opportunity than usual. However, as the flat season draws to an end I think many people have enhanced expectations. Some times they can be too much.

Tried BETDAQ on Lower Commission? See What it’s About Here

After a long week amongst the heat and distractions. I managed to plug on through the daytime card at Goodwood.

It’s not been anywhere near as rewarding as I would’ve hoped. Although I have a habit of setting targets high.

Today was pretty good fill wise in the markets at Goodwood but I found myself making a total of -£237 in silly mistakes again!

Considering I only did the afternoons racing that’s pretty poor. I didn’t seem to have as many of them this time. But when I did they were of substantial size, probably due to enhanced stakes. Maybe ramping up the stakes is a mistake in these kind of conditions. Being humble and consistent is far more reliable.

Liquidity at Thirsk seemed a lot more fluent than I expected with it being the race card before Goodwood.

This weekend I have my son so it’s a long weekend off for me. I can’t wait as this week seems to have dragged on, probably because it’s the first full weeks work I’ve done in a while! 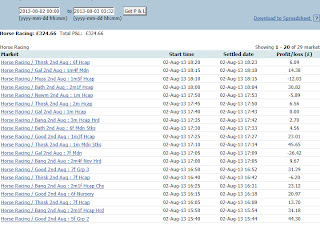 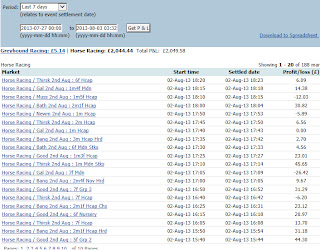 I was hoping to have an interesting update for you all today, particularly those that are in that horrible middle ground of knowing how to trade but not really making any consistency of it!

It looks like it may not be until tomorrow or Monday at the very latest but it won’t be long so keep checking for the next update.

Hope everyone has a good weekend!