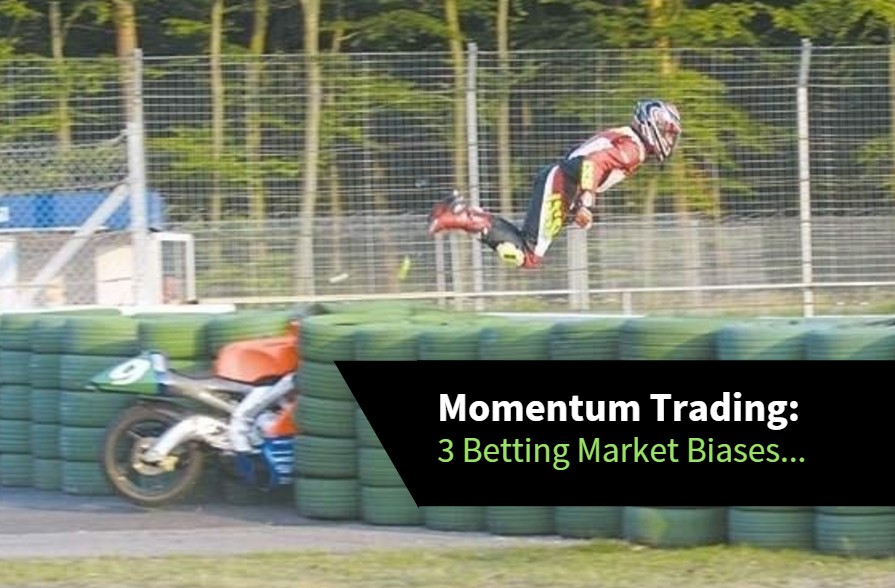 Momentum trading is possible in most markets. However, the likes of horse racing, greyhounds and pre-match markets it’s even more important.

Have you tried to trade it?

Here are 3 to think about, presenting themselves regularly in the markets. The first one springs to mind with the recent interest around tennis…

It’s common sense; those betting, move the markets pricing – their money does anyway. So the more influenced they are, the more likely they are to react (putting down their hard-earnt cash). But this has nothing to do with the markets true price. A bit like die-hard football supporters, they back their team because it’s ‘their team’.

Likewise with high profile individuals, horses etc. Years back I remember the immense hype around Kauto Star at Cheltenham, the ‘last chance to back him’…

The market went into free-fall.

While it doesn’t represent itself heavily in every market, there’s certainly an opportunity for momentum trading here…

It’s an obvious one, possibly one of the best.

Humans are inherently greedy, and receptive to irrational behaviour when scared. It’s one of the reasons so many new traders make cock-ups. It’s also the reason it’s so easy to be completely right when trading, and still make a loss.

When you look at it from the other side of the fence, it’s why successful traders have to manage their emotions and reactions.

Think about it, when was the last time you made a good decision whilst ‘scared’?

Of course it’s possible to make a good call under pressure. But it’s natural instinct to react rather than think something through. When real money is at stake, it’s a reason you react differently. If only I had a pound for every time somebody emailed me and said:

“when I’m in training mode I win, but as soon as I start using real money”

Depending on stakes, it could be that they effect the market a little too but the main point is clear. Being scared influences your decisions. When in training mode, you had nothing to lose (except a little time).

The trick is to be on the right side of this bias. You know, the guy sat in the right position, cool calm and collected – just waiting for others fear to reward him. Again, re-iterating my point about the pro’s looking at things differently.

If you come at it from a completely different angle, thinking about irrational behaviour and fear can help in many other ways.

For example: what happens when a horse rears up at the start and launches the jockey into the air?

Sure. The price has to drift, and will. But how often does the market over-react in this kind of situation and go nuts, to then only come flying back. Creating a whole load of market movement that, in the mind of a rational observer, appears a bit daft. In some respects, the ability to not be greedy and control your emotions in these kind of situations is a licence to print money.

A third bias could be described as something against the one thing that doesn’t change, time.

It’s another case of human behaviour at default if you like. People don’t like change, just look around, it’s everywhere.

When you’re on the motorway and there’s an accident, people just sit in lane and wait (thats fine by the way) but in the markets you don’t want to sit in the same lane while the situation changes. To run the parallel, you want to be the guy lane-hopping back and forth, getting ahead (winning money). To do that though, you need to have a good feel on the traffic flow. Much like if you’re sat in a jam and a turnoff is coming up on the left, naturally the traffic in the left hand land will more more as people exit.

Bringing it back to the markets, it manifests itself in several other ways…

“In times of profound change, the learners inherit the earth, while the learned find themselves beautifully equipped to deal with a world that no longer exists” -Al Rogers

Those that are first to change often reap the benefits. Just think about court-siders.

There’s much much more that could be said, but that should be plenty to start thinking about…