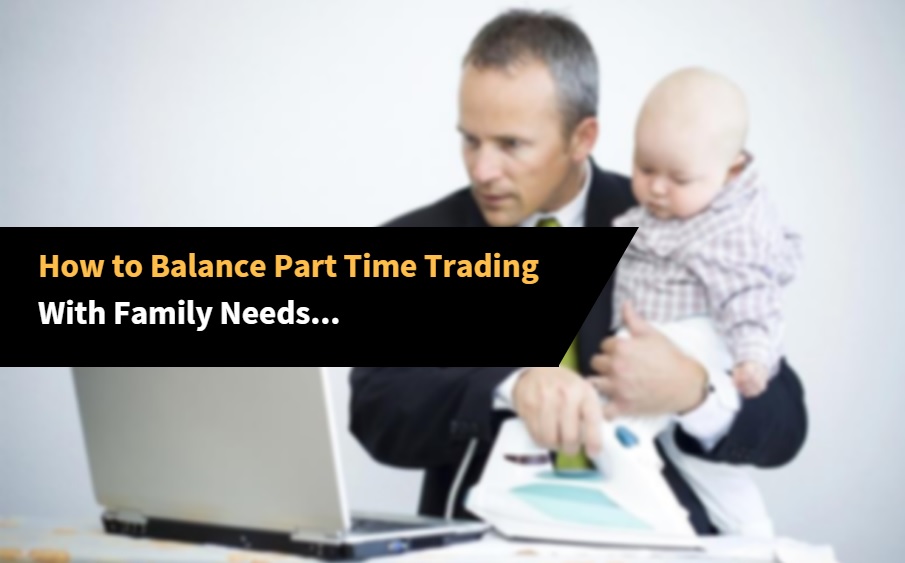 Trading part-time, whilst learning isn’t easy. More so if you’ve a young family to support and dedicate time to.

Last week I had a message on the Facebook page that struck a chord with me.

I’ve thought about it several times since, certainly worth sharing some thoughts…

Before I share my thoughts I want to kick this post off with a little reality; everyone has different objectives and goals. I have a few heavy-duty one’s myself, but being dedicated doesn’t necessarily mean dropping everything and everyone else. That’s just sad.

Having made a few mistakes in that area myself over the past decade I feel qualified to repeat it;

A little bit of a heavy start, although an important and realistic one, for several reasons (discussed shortly).

…don’t forget where you come from, and who’s supported you. There’s always more money.

The message that inspired this post, and my initial response… 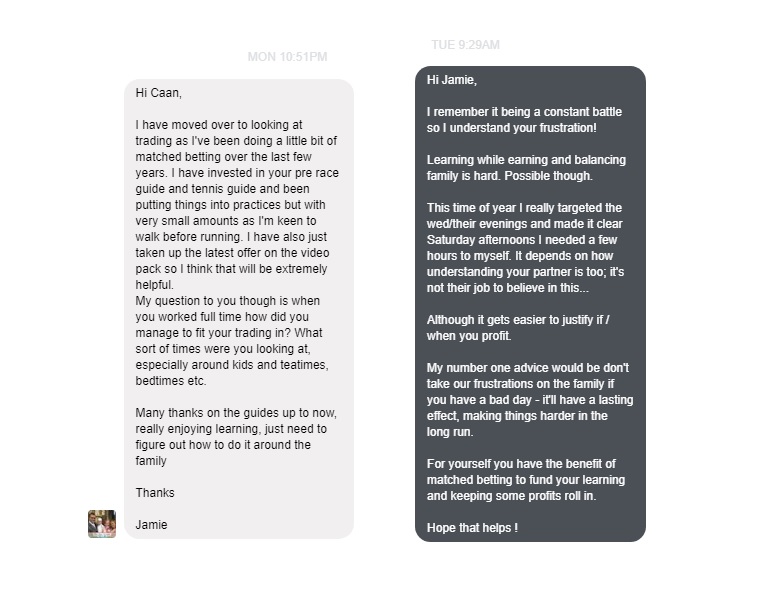 A brief response to something I’ve so much to say about. But with all the messages, emails and tweets it’s hard to keep up at times!

First and foremost; if you’re hoping to trade on Betfair for a living at some point, you must address this issue. Even more so if you have a young family, like Jamie.

Many people look outward, towards the markets. Which is of course, the right thing to do in one sense. But the missing part of the puzzle (for most, not all) is looking inward. Towards your own habits, awareness, well-being, routine, lifestyle, structure …and of course family.

In short: you need a solid structure to build your trading success on top of. Not the other way around.

This may not go down well with all readers, but I’d rather tell it like it is.

We’re all presented with different levels of support in our lives. Some get lucky, born into support and wealth, others not so much. Coming from the latter part I can say, there’s no point dwelling on it, you have to play the cards you’re dealt.

Maybe I’m going the long way around here but the point I want to make is this:

You need that supportive foundation, as much as a good strategy, so don’t burn any bridges. What goes around comes around, when you want that extra hour on the weekend, it’s not going to be received so well if the family see ‘this trading thing’ as negative to your relationship with them.

Plus, the chances are you’re interested in trading to unlock that extra wealth to support your loved ones. Upsetting them on route is counter-intuitive.

How to Manage it:

Like every problem, it’s best solved with a conscious structure in place. From one lifestyle to another, it’s bound to be different…

This Time of Year

As I said to Jamie (assuming he works 9 – 5 hours) it’s best to have small pockets of quality trading time. Dig out the bright spots and work on them!

For example: over the winter there is usually some better quality all-weather racing on the Racing UK channel, typically Kempton. The evening racing also runs that bit later, making it easier to get in from work, settle down, and get the nippers in bed before trading a couple of races.

Weekends are the focus for most part-timers for obvious reasons. Building a few ‘trading periods’ around weekend plans is advisable…

Planning ahead is a way better approach than busting in, pushing everything you can to one side until later – just so you can trade a couple more races (badly).

If you’ve listened to this video on YouTube you’ve probably heard a story that happened to me when behaving this way. It’s not a good approach, especially if you take frustrations out on those around you. By the way; it’s never the wife, dog or kids fault a trade went bad!

Jamie mentions that he’s making the transition between Matched Betting and Betfair Trading so he has the benefit of a few pounds rolling in as he learns. Not a bad idea when it comes to explaining what you’re doing to the Mrs. I wouldn’t advise against it, even if returns are little limited.

Hard work is a pre-requisite to any kind of success, but don’t get the two confused.

Working smart, or working smart and hard will always trump working hard. There’s no getting away from it. Take every single short-cut you can, although it’s not as exciting; having that one ‘aha’ moment in your learning curve will skip you ahead way faster than shutting the kids and Mrs away as you trade one race after another. A week on week.

Plus, working every hour God sends isn’t why you’re doing this – is it? For me, it’s certainly never been the reason I embarked upon this path.

As much as I love to trade the King George or get stuck into the boxing day racing, I certainly wouldn’t put it ahead of my kids!

Be smart, plan ahead and find the path of least resistance…