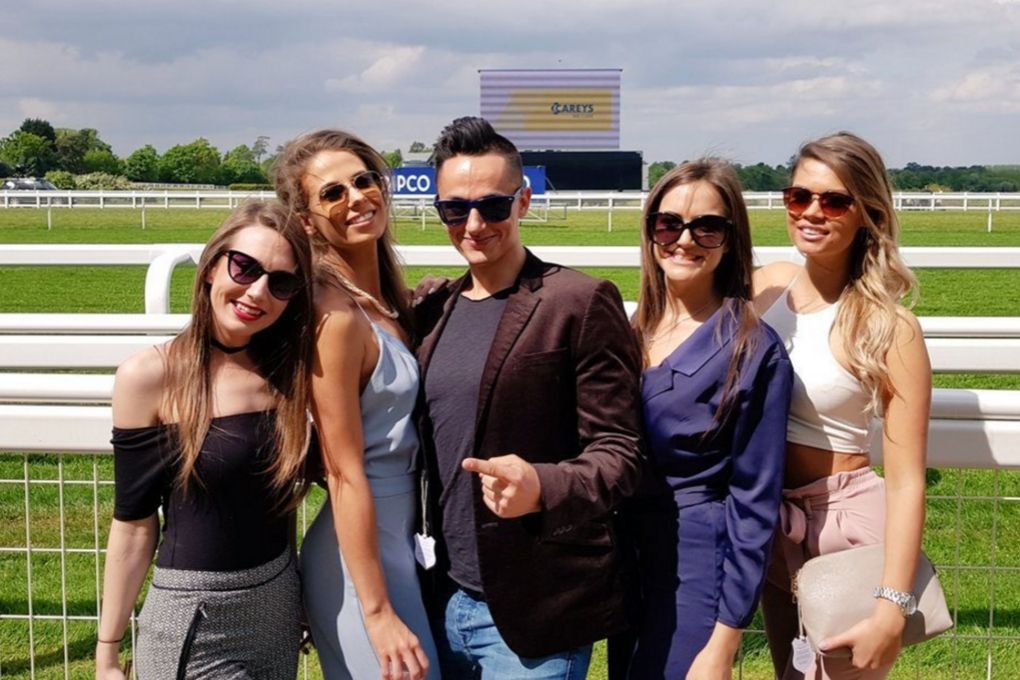 Love him or hate him, the Blogger is everywhere. It’s hard to go a day without him appearing on your Twitter feed.

With his media views and followers flying up one meeting at a time, it seemed fitting to look a little deeper into the man who creates so much attention around the sport.

Racing Blogger is just an ordinary Racing Fan. What makes him different is he records everything with his selfie stick and posts it to his Twitter Account @RacingBlogger. Racing Blogger’s real name is Stephen R Power and he lives in London. Apart from his Twitter persona, he is a pretty normal bloke in his mid 30’s. He loves the gym, likes wearing a suit and drinking a beer. A flashy London lad who likes a good haircut.

I’ve met him for a beer. My feelings towards him after spending an evening with him was that he was down to earth, loves horse racing and wanted to work within racing. He hasn’t been given any opportunities by Racing TV, At The Races or ITV Racing for his dream job yet; but more about that later.

It’s been a while since we’ve had that beer now, but his popularity just continues to grow every year… 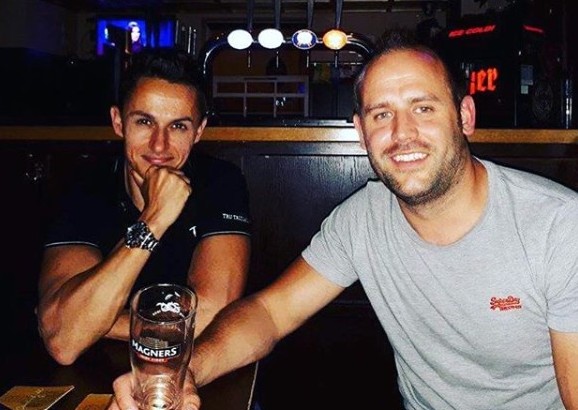 This must be a question that people in racing ask all the time. The reality of horse racing is that it’s a very small sport; circles are small and it’s hard to avoid someone you don’t like. Blogger appears to infuriate the older racing fan who are more appreciative of hours of form-book study rather than a two-minute interview on Twitter.

The reality is that for every one of those head-in-the-form-book types, there are 50 or more young lads who just love a day out at the races with their mates. They don’t care if they don’t know everything about the horses, they just want to have fun. That is what Racing Blogger delivers each day. That is where his following comes from.

Blogger also hits the sweet spot in racing drama. The older fans can’t stand him; yet spread his videos complaining about him. The younger fans truly enjoy his content. You add the two of those things together and racing creates a monster that the whole industry talks about. It’s a smart move on his part.

“I want more followers on Twitter than Matt Chapman and to be compared to racing royalty Nick Luck and Big Mac one day!

I’d love to work on TV as a presenter, bringing racing to life for all the people at home. I want to show them what they’re missing, I want racing to be fun to watch and I believe I’m the man for the job.”

Blogger has a good bit to go to catch up with those type of racing presenters, but you can’t doubt his hard work. His media views on Twitter are relatively high. Over 300,000 people watched his reaction to Enable finishing second in the Arc at Longchamp.

Why So Much Hatred?

Of course it’s not all positive with Racing Blogger. When he first came onto the scene we had some questionable things come from his account. In the past he has deleted losing bets, posted fake photos and posted a lot of copyrighted content. He’s had his Twitter account suspended more times than he has appeared on TV!

However, in the last year or so, he seems to have turned it around. This has given him more access in French Racing – as we seen with his media badge at the Arc de Triomphe. Maybe this is the new path that he is on now he has gained experience with Twitter outrage, but his “haters” will never forget his mistakes!

“I always loved Big Mac growing up as a kid – outspoken and brash. All the jewellery and funny hats, he was a real character who people either loved or hated.”

Blogger has found himself on the wrong side of hatred more than a handful of times.

I can’t put my finger on why some racing fans hate him so much. I mean at the end of the day he not exactly punching them in the face. It’s so easy to just block him and move on with life; but Blogger’s “haters” don’t do that – they are motivated to remind him every day how much they dislike him.

If I had to take a guess at why he’s disliked so much, my theory would be this: People feel like they know more than him, but don’t have a platform and, subconsciously that builds anger. Racing is is often pitched to the masses around opinion, where everybody feels like they know more than everybody else. But only a certain amount of racing people have big platforms, in a society now where everyone feels like they should have a voice – it must be very frustrating for some to see Blogger have huge engagement (yet nobody cares about their opinions).

Let’s take Simon Rowlands for example, Twitter profile @RowleyfileRRR. He is an expert in racing times and highly intelligent. Here’s the kicker though – he’s old and boring. He has less followers than Blogger and the reality is, he’s never going to demand attention like Blogger. I don’t know what Simon thinks about Blogger, but you can see that Simon spends hours and hours on racing and gets no social appreciation – so it’s natural to see why he might dislike someone like Blogger. That is a good example, but it can be repeated all over racing.

In the early days, Racing Blogger definitely lost money. He posted numerous Acca’s and short odds favourites that got beaten, and some more that he deleted after they got beat. He wasn’t as clued up as he is now. To be fair he’s spent so much time on racing now that he must know a fair bit about the game. He has got more savvy using exchanges too so he’s definitely improving.

I have to say that the jury is still out on whether he makes the game pay or not. However, you have to consider that he goes racing and travels a lot, and considering he hasn’t got a job at the moment he must be funding that somehow. So he must be making some money to fund trips to France and going racing in the UK on a weekly basis. Maybe its the circles he gets to mix with?

The reality is nobody will know if Blogger is making money or not. From what I’ve seen, I highly doubt it. There’s every chance he now gets some ‘inside information’ as a result of his efforts, but knowing how racing is, I doubt that would make the public domain. From a betting perspective, I would think he’s best to keep it recreational (smaller stakes) and share this with his audience.

In my opinion, if he’s to make money from the sport – it should come from the racing channels!

Will the Racing Blogger Appear On ATR or ITV In The Future?

Personally I think it’s only a matter of time before the Blogger lands a TV gig. His interviews and content get better with each passing month and while he might not be a good tipster, he can definitely hold an engaging interview with trainers and jockeys about their claims. When you think about the amount of dossers we have working for Racing TV and At The Races, it seems strange that the Blogger hasn’t already been offered a presenting job.

Love him or hate him, he is excellent on camera. He started off selling himself as a racing tipster but he is way more suited to just focusing on interviews. That’s what he’s good at. As we have seen with Aidan O’Brien, John Gosden, Gordon Elliott and Willie Mullins this year – trainers respect him and deliver a far better interview with Blogger than they do with the TV cameras. Racing Blogger will be on your TV screens soon in my opinion…

This is a great Twitter debate that is always going to rumble on!

Obviously it only exists because both sides are so divided. It is the Brexit of Horse Racing.

The positives for Blogger are; his interviews are fantastic, he’s young and passionate about horse racing, he has superb engagement and he makes horse racing fun.

The negatives are; his questionable bets, his copyright content issues, chasing bets and his drive for self-achievement.

Let’s call a spade a spade here though. All horse racing presenters are driven by self-achievement – they all want the best gigs, the most views and more money. That’s just life, I don’t blame him. So I feel people who critique Blogger for that are clutching at straws. He has definitely improved upon his chasing bets and deleting tweets and got more professional, but let’s see if he keeps that up…

On the whole, I don’t see why Racing Blogger is bad for racing. If he attracts more people to the sport then great; if he doesn’t then that’s fine. He’s basically doing nobody any harm. If you don’t like someone you can: unfollow them, mute them or block them.

Racing Blogger will always have his fanbase and they are likely to be lads in their 20’s who enjoy a day out at the races. They are likely to withdraw £200 from the ATM before heading to the track and they are happy to blow that on booze, bets and whatever else they like. They don’t care if they get value, or lose – they just want to have a good time and a good day. There’s nothing wrong with that, despite what some old farts in racing will say. These lads would spend the same money on any sporting event, football, boxing, etc.

There’s no definite answer on whether Blogger is good or bad for racing. He will just continue to do his thing and whether he succeeds in life will be down to his work ethic. Personally, I wouldn’t take a tip off Blogger, but his content doesn’t offend or make me angry either. He’s just a bloke recording a day at the races!

Let me know in the comments below!

Next Read: Bet365 Account LIMITED for Winning £6,667 they Responded!

8 thoughts on “Racing Blogger: Love or Hate? Next Presenter?”