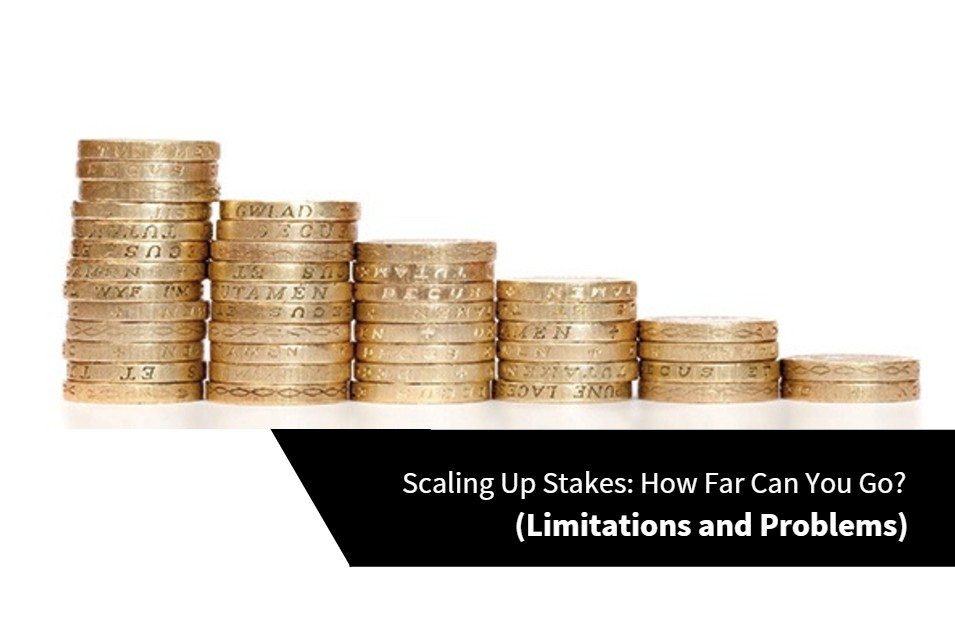 Is it possible to continually scale-up your staking on Betfair? making more an more in the process.

While it’s certainly possible to increase stakes again and again in some cases, it’s not always possible. Let’s set the record straight…

How Far Can You Go?

Earlier in the week I had this message via the Facebook page: 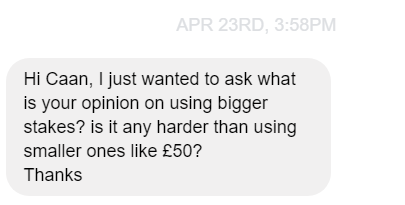 It’s a reasonable question, many have asked similar things. In fact, if you’ve never seen it before – check out the YouTube Q & A playlist after this post.

I thought the question was interesting enough to warrant a whole post because, when I started out I didn’t actually look at this realistically. It took me many mistakes (and much over-staking) before I realised that all situations and edges aren’t that equal, and so they must be treated on individual merit. A daft assumption in the first when you think about it.

Trading bets has the obvious benefits, such as being tax-free, but you can’t expect to scale up stakes exponentially. Maybe in the early days (before I was around) and there was no cross matching. Scaling up could have been easier.

Broadly speaking, the limiting factors are;

As I just mentioned, not all situations are equal. Some play right into your edges hands, others don’t. What works in one situation isn’t scale-able to another.

For example: a court-side bettors edge is the delay between the action on pitch or court to those betting at home. It doesn’t necessarily mean the two can’t make money from the same sequence of events. But the individual sat at the event has a larger advantage, thus the situation becomes more saleable for them! The same applies between a longer-term edge and stealing a quick profit via a simple scalp trade.

On the other hand, it doesn’t matter if you have a very big edge if there’s no betting volume in the market. There has to be money to match against, right?

To have a profitable trade, you need a valuable entry, and or exit. Without enough volume in the market, larger stakes effectively chase away your edge – making scaling up trickier.

For example: if you enter a trade at 4.0 with the intention of trading out at 4.4 there needs to be the right amount of bets in the market to match both entry and exit. Over-staking might mean you could get the trade underway, but then have to take 4.3 or 4.2 to exit, eroding part of your edge, increasing risk in the process. It just doesn’t make sense.

Hopefully that answers the initial question best. Stakes of £50 will fit pretty much most situations, unless you’re trading a particularly weak market such as a greyhound race. Beyond the £100-£250 threshold situations can get tougher in day-to-day racing. Especially when you factor in how it may leave you ‘feeling’ in the moment, if you’re not used to using them…

Does Sport Change Much?

Being realistic for the given trading situation is important because of these issues. As you might expect, some sports are far more scalable. Football will always be the biggest, there’s more betting going on! The downside being, the more popular a market is, with the more money turned over, the more efficient it becomes. Finding edges in the illiquid markets and volatile situations is far easier in my experience. Maybe some of that is down to approach and trading style though.

Time of year and seasonal changes is another to think about when increasing stakes. Is it realistic to use the same stakes, for the same edge, during the winter months as it is for summer trading? In horse racing the summer racing attracts far more money than the likes of January on the all-weather courses.

A bit of a long-winded answer, but hopefully a useful one to many of you!