What and how does cross-matching work on Betfair? Quite a few of you asked questions after a post last week about weight of money, and then the over-round.

Rather naively I assumed it was one of those things that all new traders would have looked up.

What is Betfair Cross-Matching?

When betting exchanges were first introduced, it was just a case of getting a bet matched.

There wasn’t so much ‘smart stuff’ going on. It was just backing and laying…

The market was pretty ‘dumb’ by all accounts. Probably why you hear tales of instant riches and £100,000 a month in the earlier days (those ahead of the curve).

However, there were some pretty big changes when cross matching came in from Betfair. In all honesty though, it probably existed way before Betfair implemented it, just via one of the big players, and at a wider margin. I guess that’s every automation geeks worst nightmare; Betfair replacing you, what’s to stop them?

So what is cross matching?

As the name suggests: it’s the process of bets being matched across other outcomes in the same betting market, inversely proportional to price, in order to create additional liquidity within a betting market.

In the past, if you placed a back or lay bet way off the available price and there was no money in the market, it would sit there until it was matched. Now, the cross matching algorithm will see it matched sooner. More on how cross matching works in a moment.

Using a special algorithm, the market sees the unmatched bets suddenly matched, all in the blink of an eye.

Before you read on; don’t let all this send you into a panic.

How Does Cross-Matching Work on Betfair?

If you haven’t seen it already, it may be best to read about how betting odds work here first. Betting markets operate to 100% over-round on Betfair because of the cross matching algorithm.

Let’s start with an example of a ‘typical’ illiquid market, how it’ll often look way before an event starts.

As you’d expect, the book is sufficiently ‘slack’ with large gaps in pricing. Over round percentages shown at the top of each column. Nothing unusual about that.

But for argument’s sake; if there was no other money in the entire market, other than displayed. What would happen if a back bet were to be dropped into the market at a significantly shorter price? (see how the £50 previously at 2.5 is now at 1.6).

The first price at which the cross matching would be triggered in the example would be 1.76. This is where the lay side of the book reaches more than 100%.

When the book reaches 100% it means that; it is now possible for Betfair’s cross matching algorithm to trigger and spread the invaluable bet across the other ‘available’ bets in the market. This is calculated in line with what money is at those prices within the market at any that time. Also, bearing in mind that the prices are different, the stakes will be different at different prices.

The simplest visual I could come up with…

More in a moment but the thing to remember is, when an invaluable bet enters and the cross matching is triggered, it effectively causes pressure in the market like this: 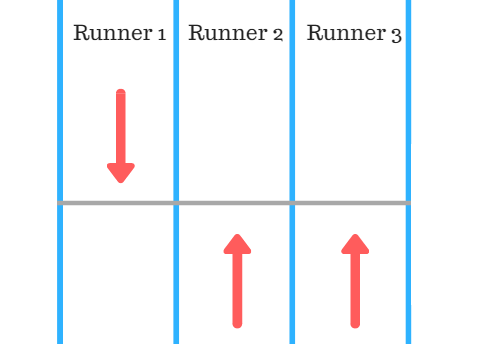 The more aggressive the betting is within a 100%, the more money that will be simultaneously matched on the other runners. Cross matching is triggered by both back or lay bets.

If you’re interested, the cross matching calculation and other information (mainly for automaters and vendors) there’s more via the developer program here.

Simple explanation: To calculate the reflecting odds between two selections it looks like this…

So for example. If it were a tennis match, player A may be trading at 3.0. This means player B has to trade a 1.5 because:

Beyond two selections it gets more complicated. But as previously stated, it doesn’t matter so much to manual pre-race traders, as long as you understand the possible effects the cross matching can have, and when it’s likely to trigger.

Depending on which sport you prefer to trade will depend on how important the cross matching calculation will be to your trading. Events where there are limited outcomes, such as tennis or the unders and overs markets in football make spotting the cross matching far easier. Within racing, there is far more attention upon the few selections heading the market when it comes to identifying cross matching.

Why Was Cross Matching Introduced?

To increase liquidity and user experience I believe was the corporate line from Betfair in 2008.

Many have expressed different views. As I said earlier though, I fully suspect there was or at least would have been individuals running automated programs on the exchange like or similar to this previously. After all, if you look at the example above. All back bets entering the market between 1.6 and 1.76 would effectively be giving away free money to someone running such a program. Now that person is Betfair.

Bearing in mind how often that would happen, and how much money could be made, it’d be silly for them not to. Longer term followers and pre-race traders will have seen ‘the bomber’ as he’s affectionately refereed to (a massive mug punter that takes huge chunks out of the price on the exchange). This kind of behaviour routinely triggers cross matching, giving away a lot of value in the process.

Another reason that circulated at the time was; the additional revenue cross matching provides will fund development for the exchange. I’m sure they’ve spent a lot on the upkeep although from the outside it doesn’t seem to be the case.

When cross matching came in, many complained their competitive edge disappeared or was drastically reduced. I can’t comment though, cross matching was active before I made any proper money!

With that in mind…

How Does Cross Matching Affect Traders?

With this formula, we can see the exact difference between the matching an order and being ‘cross matched’.

However, it is important to note that Betfair respects the FIFO principle within the formula – first in, first out. I’ve seen many arguments to suggest that this simply isn’t being followed. For example, many people have noted how their money should be the first to enter the market but, instead, it ends up waiting behind others. I’ve thought it at times too, but in the same breath, it has also happened the other way around too. It’s important to be honest. 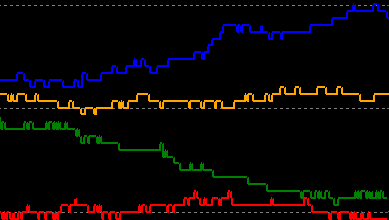 For you and I as traders, cross matching is just another market influence to bear in mind. In some instances, being aware that cross matching exists and is in operation presents an additional positive or negative to trading decisions. It provides an overall element of consistency to the markets.

Noticing market sentiment can be of particular interest to markets such as grehyounds, racing or even football (before the start). So having this characteristic active within the market provides some kind of structure to bear in mind. As shown earlier, one price goes up, another has to compensate.

Personal note: While it’s important to understand cross matching and the impact it has. I think new traders get a little caught up on it sometimes, don’t. Being unaware is daft, but obsessing about it will have you chasing your tail!

Hopefully that’s a pretty thorough explanation as to how cross matching works within Betfairs exchange markets. To finish up, here’s a few questions I’ve noticed have cropped up over the years when talking to others:

Is cross matching on for every market? Nobody knows for sure what the criteria Betfair uses to switch on or off. If they did, there’s a good chance it would be possible to exploit. It does seem to be on in most instances though. Automation users are probably the most likely to notice should it be off. To manual traders it’s of little importance, cross matching will certainly be active when the betting is at its most fluid.

Are Betfair interfering in the market?

To this date, one of the biggest questions to arise from this topic has been the morality of Betfair intruding upon the markets like this. Although we can’t exactly give a final judgement against them, you can certainly say that they have altered the market and how it tends to behave. From here, the argument is up for debate and it often ends in what’s fair and what isn’t. Similar questions arise with various API upgrades and charges.

It’s important to remember that Betfair is a licensed bookmaker and publically floated company, they are in control of their terms and conditions. Could we really expect them to just sit back and not squeeze it for all its worth?

Are there benefits for customers?

Betfair would argue it’s about getting customers bets matched, so that’s a positive. Although it takes away a lot of benefit from those scooping up value in the markets. Depends who you’re talking about I guess. For the consistent winners, not so much.

How can I work out the staking differences for the algorithm?

Staking across the book has to be alternatively proportionate. Again I see no value in this as a manual trader, the geekstoy software has a function called ‘tradeshark hedge’ which will do the maths for you within markets where there are only two selections. For example tennis. A quick example, similar to the one earlier in this article would mean in or create a similar match between 1.5 and 3.0. You would need to lay for double the stake you would have backed on the opposing player.

Do Betfair use bots?

According to the company themselves, they are in control of an internal account which is seen as the ‘counter-party’ to the cross-matched bets.

Although there will be continued debate as to whether Betfair is right to step into the market in this way, the fact remains; cross matching is there. There’s no value in complaining! You’re far better off understanding what’s going on and working around it!

Feel free to add any other questions in the comments below!

14 thoughts on “How Does Cross Matching Work on Betfair? Full Explanation:”