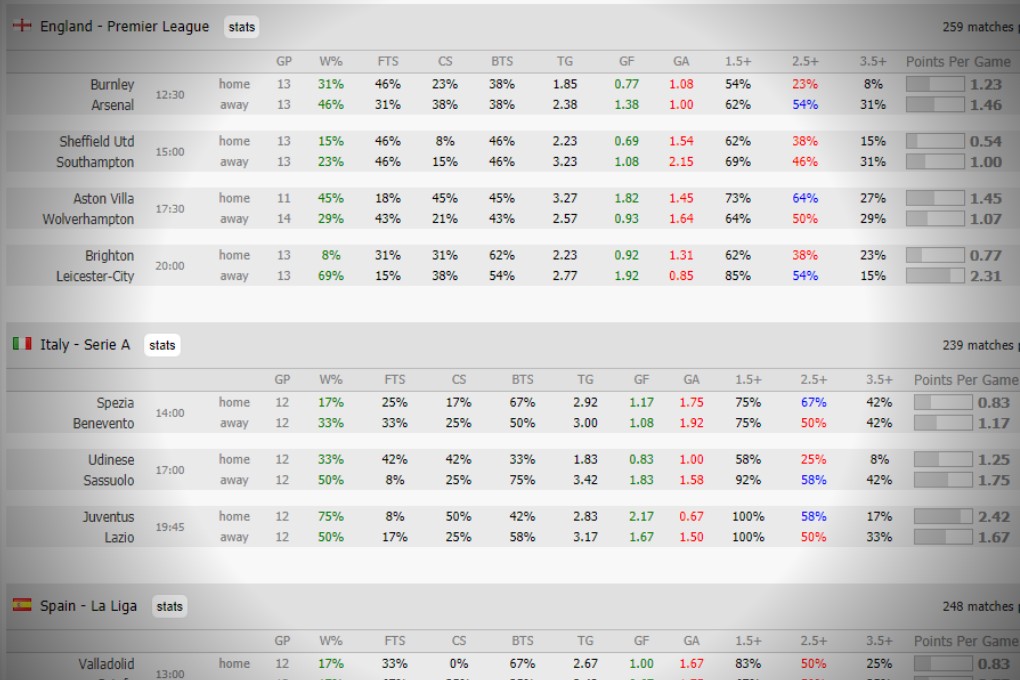 I’m a big fan of using football stats when trading football markets on Betfair, that’s why I use SoccerStats.

The problem is; there’s a lot of meaningless stats. You want to cut through to the important stuff to the stats that can make a real impact on your trading.

Football is a 24/7 game at the moment, especially with the way the Premier League have staggered their fixtures. The reality is you can’t trade every game, so choosing what games to focus on has never been more important.

In this article, I’m going to give a quick run-through of what’s available on SoccerStats and what its best used for…

What Do You Get On SoccerStats?

The answer to this question is an incredible amount. I’ve been a big fan of using Infogol and FootyStats for a while, but SoccerStats is easily up there in terms of football research. The amount of information available is excellent.

I like to focus on the bigger leagues, so the volume of information there is excellent. However, they do offer smaller leagues too and also live scores. They even offer a range of stats on some of the more obscure leagues – even leagues that you can’t trade on Betfair.

When you navigate around SoccerStats, you can find a lot of helpful information. From a trading point of view, some stats are more important than others.

When doing research I will focus on:

The Value Of Goal Tables

Aside from the Match Odds market on Betfair, the next most popular trading market is Over 2.5 goals. The goal markets make up a huge amount of liquidity on Betfair, and they can be excellent for scalping and trading in general – whatever strategy you like to use.

Check out this YouTube video where I go through my Under 2.5 Goals Strategy:

A key stat to focus on for these markets is Time Of Goals and Goals Per 15 Minutes. These are a vital tool when you think about trading the over/under markets. Let’s take over/under 2.5 goals as an example, just because it’s the most popular. If you’re thinking about scalping some time decay at certain stages of the game – you want to know when teams are more than likely going to score.

For example, last season Liverpool scored a huge amount of goals in the final 15 minutes before HT. So, this was an area to avoid when scalping unders. Check out the table below: 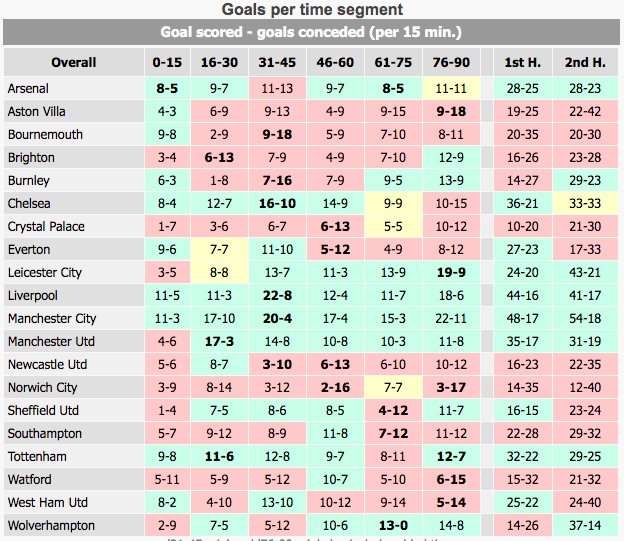 Another interesting angle there was Arsenal in the final 15 minutes of the game. There weren’t many goals compared to other sides, and they would have been a side to back unders and profit from the accelerated time decay in the final 15 minutes. Chelsea also gave good scalping opportunities between the 61st and the 75th minute.

It’s tables like this that will see you using the right football strategies at the right time. Clearly, the flow of every football game is different, but being ready to strike when the opportunity presents itself is very important when trading football.

SoccerStats also offer a very quick brief overview in a percentage format. When putting an under/over 2.5 goal strategy in place I wouldn’t compare leagues, but it’s definitely an interesting talking point. Check out this snapshot: 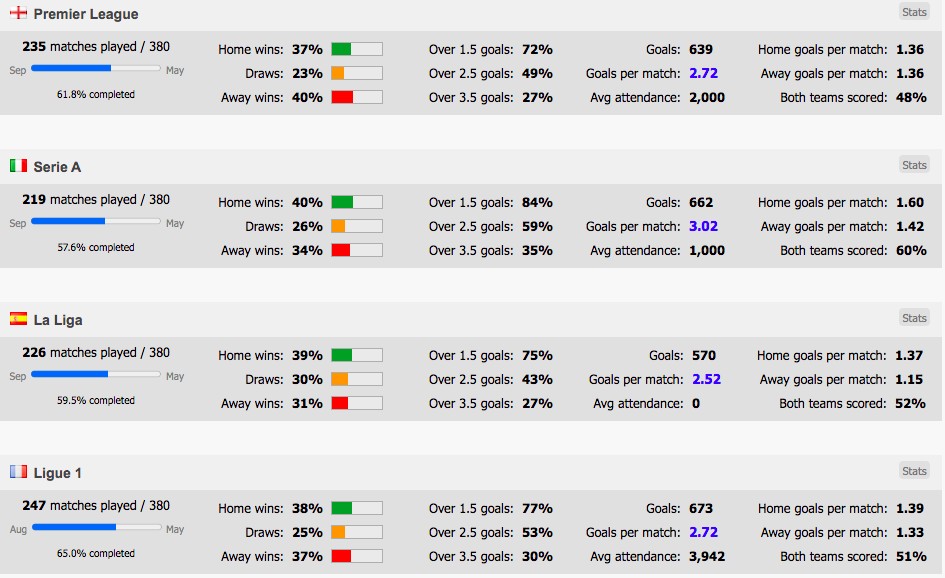 It’s interesting to see La Liga having such a low percentage for over 2.5 goals this season – usually, La Liga is packed with drama and goals. For all that Sky Sports say the Premier League is the best league in the world – the other leagues in Europe see more goals! You can’t beat the Premier League for drama and talking points though!

There’s a lot of ways to trade on Betfair at the moment with more football on TV than ever before and Betfair having more liquidity. I have plenty of first half and second half strategies in my Football Trading Video Course. I have also focused on finding some betting edges in-play for those of you that enjoy a good value punt as well as trading. I’ve also gone into more detail and how I find the right football stats for trading.