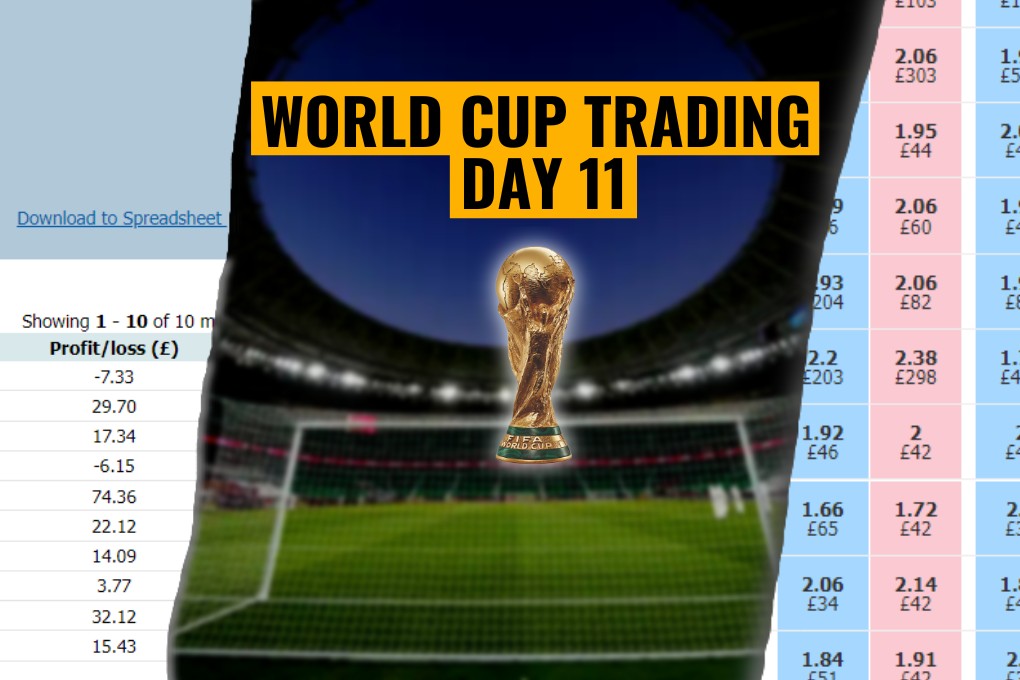 Wednesday at the World Cup sees Group C and D come to an end. It’s a good idea to read yesterday’s blog and see where I’m coming from with the group situations, and that feeding into our trading strategy. There’s a lot more detail in the Football Course too.

Groups C and D have turned out to be more interesting than expected with the way the results have gone. We have some massive games today.

Denmark has got themselves into a bit of bother in Group D. The loss to France wasn’t a major setback, but the draw with Tunisia leaves them needing a win here. Australia only need a draw after beating Saudi Arabia. Really, Tunisia blew a great chance in the Australian game, that’s actually happened twice already this World Cup after Japan beat Germany but then lost to Costa Rica! Denmark knows what they have to do, but I can’t see them being very attacking from the start. Australia will put eleven men behind the ball and play for a draw – I don’t think there’s any doubt about that. I think we can play the early under 2.5 goals trade here. It’s starting at a nice price of around 1.99, and I can see a pretty early move, too. Australia has been bang average, but they can stop Denmark in the first half in my opinion. Much like our successful trade on Brazil v Switzerland game. Denmark likely win 1-0 or something, but I really don’t like the price at 1.55.

It’s still annoying me to have two games on at the same time! Got so used to the 10 am start, it was cracking having a full day of football. I’m reasonably confident on the early under 2.5 goals trade on the Australia v Denmark game, so I’m going to focus on that game for the first half. The plan for this game will be to keep a loose eye on what’s happening, but really check in at half-time and see where we stand. The way things have worked out in this group means France can rest a few players here, so we could see a bit of a disjointed game. France has been the best side so far in my opinion, but they can rest players here. If we get to half-time level and France are creating a lot, I might get involved, but otherwise, there isn’t anything jumping off the page for this one.

Group C is also going to have a cracking finish. I thought Messi and co would have their feet up for this game, but after losing to Saudi in their first game they have work to do. The way things have worked out, a win here would still see Argentina top the group, so it’ll likely finish business as usual. I thought Poland would be a team to take on coming into the tournament, and as I said previously you come into the tournament with strong opinions, and really you’re just seeing should you change in the opening games. I haven’t seen anything to change my mind on Poland. They played a boring 0-0 against Mexico and then conceded a host of chances to Saudi. They conceded an xG of 2.25! Despite winning, that wasn’t a good performance in my book, and I’d expect an Argentina win here. I do feel we’ll see a slow start – Argentina went into half-time at 0-0 with Mexico, so the early under 2.5 goals trade is definitely a strong option here. That’s my target for the first 20 minutes, and then I’ll be looking to get on Argentina at a compression point in the second half.

Nothing stands out here for me. With a nice option in the early part of Poland v Argentina and in the second half too, this game is easy to skip. I had a brief look around the stats and markets, and nothing stands out anyway.