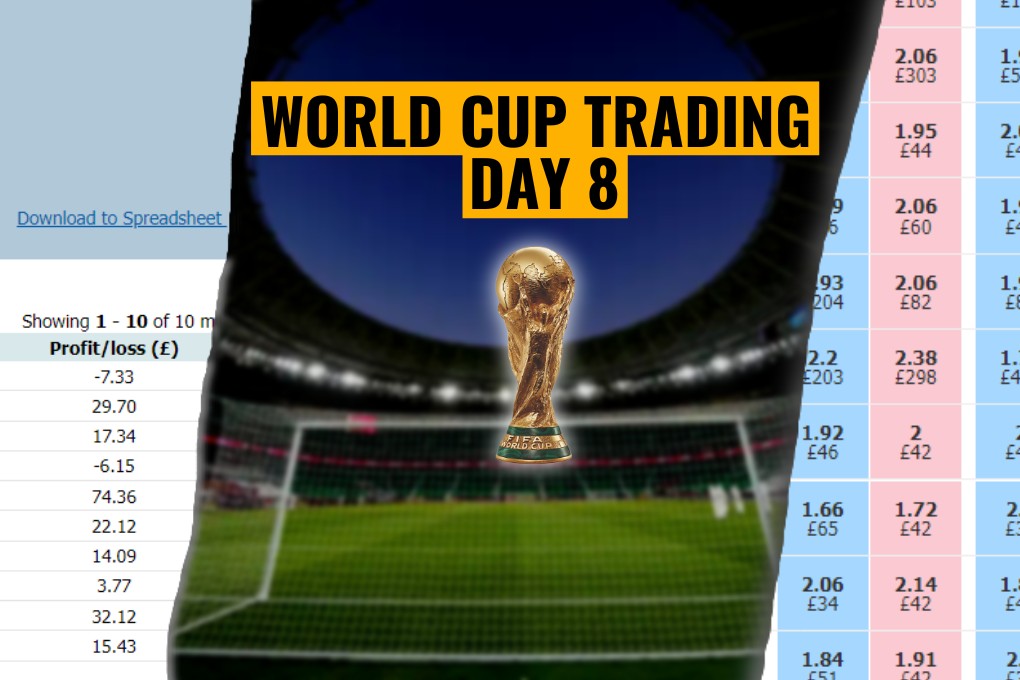 I hope you enjoyed a few discounts this Black Friday weekend, we have another interesting day in the markets at the World Cup on Sunday.

It’s been a mentally busy few days for me, and I’m going to keep today’s blog short and sharp again because it’s the weekend. We managed to land some nice trades, and I hope you are making a tiny sum so far.

The schedule for Sunday is:

Not the most appealing start, but we’re likely to see good liquidity because it doesn’t clash with any other sport. Japan shocked everyone when coming from 1-0 down against Germany, gubbing low odds along the way. Germany finished with an xG of 3.81 and were unlucky, but they play with fire at the back. Eventually, you’re going to get burnt at some stage and that happened. Costa Rica looked bang-average against Spain, and as I said in that game there was definitely an angle to get on some fancy handicaps at half-time. Less so in this game, but Japan should win easy. They aren’t an appealing price at the mo, so my trading plan here is do nothing in the first half and then see what our options are in the second. I expect Japan to win, so it will be a case of looking for some compression points in the second half if it’s 0-0 or some nice prices on goals or handicaps if they are ahead.

Any fans of fans will be worried about Belgium. They created 0.98 in their 1-0 win over Canada but conceded a whopping 2.90. They should have lost, de Bruyne looked embarrassed to get man of the match afterwards. Canada came through CONCACAF which is a little weak, but they topped the group and were solid at the back. Morocco also looked very solid at the back holding Croatia to a 0-0 draw so I can see them causing Belgium problems here. This game stands out as an early Under 2.5 goals trade opportunity, and I wouldn’t mind laying Belgium if they start slowly. The market will know the under-lining numbers so we could see a rapid move out should Belgium look average again. This game I’ll be focused on the first half, hopefully no goals early, and it might be a nice chance to take a break in the second half.

We had a dream trade in the first Croatia game. Laying them at around 2.1 and getting on Under 2.5 goals early too. They played out a very boring 0-0 against Morocco, and I wouldn’t be surprised in the slightest to see another 0-0 here. This game screams an early unders trade in my opinion. Even if it turns out to go wrong, all the stats point to it here. It’s an ideal opportunity. I’m not a fan of Croatia either, so I’ll be looking to lay them at some point too, but my plan is to focus on Unders first.

A proper World Cup game this. So much pressure on Germany too after losing to Japan. I’d be lying if it wasn’t tempting to head out with the lads for a few beers to watch this one! That will probably be the thing that happens, too. I don’t fancy scalping or trading unders here with Germany playing an open game. They create and concede a lot, that makes it hard to trust them and that equal trading uncertainty. I do fancy Spain to win, so I’ll spend some time looking for a good time to get on them at some stage but I am relaxed about this one. If the opportunity comes to get on Spain in a good moment, fine. If not, happy to sit this one out.

Have a great week!