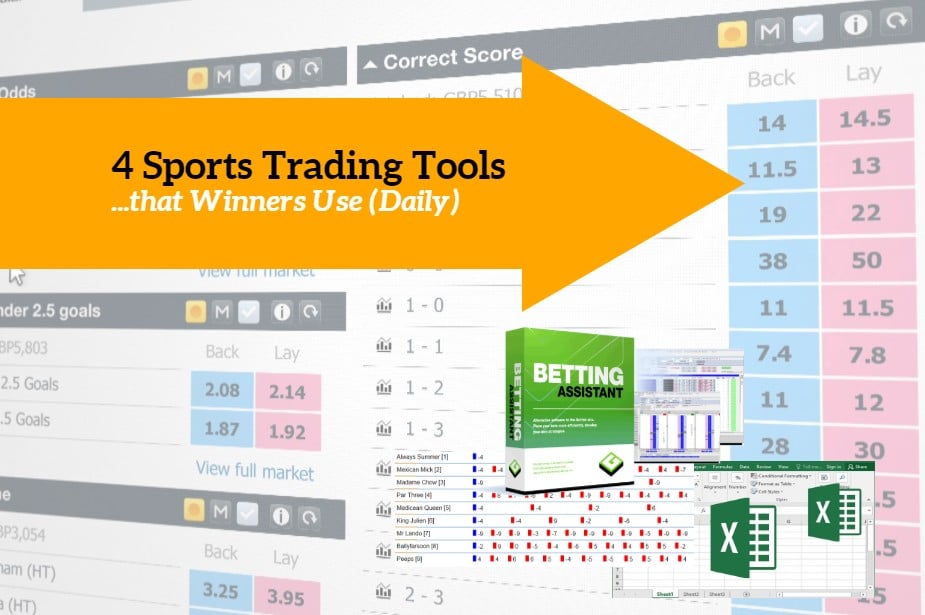 Besides blood sweat and tears, there are a select few tools that successful Betfair traders use daily.

Before you get your hopes up, none of these tools will magically turn you into a profitable trader overnight. Whilst we like to think that buying a piece of software will change the game, it really is hard work that pays off the most. However, some of these tools will make a big difference in your trading routine.

Perhaps they will save you some time when doing your research, help you optimise your trading strategies or simply serve as an easier way of placing bets.

Of all the “career paths” in the world, sports trading is certainly one of the most accessible. You don’t need a fancy degree or thousands of pounds worth of equipment.

In fact, most of the tools we’re about to run through are free…

Whilst you certainly can place trades without third-party software, you’re at a big disadvantage if you’re not using it.

Why is Betfair API software so useful? In a sentence, it gives you a better overview of the market and allows you to react quickly to potential moves.

Software such as Geeks Toy and Gruss will let you see the markets in ladder view, which means you can see where the money is on a much wider range of odds than just using the website alone.

One of the other main advantages of API software is the ability to place stakes in the market at a much faster rate. Under normal pre-event conditions, you can place bets instantly using the “one-click” feature. One-click betting is one of, if not the biggest, weapon in your betting armoury.

Comparatively, placing bets on the Betfair website takes 3-4 clicks and a keystroke or two to type in your stake amount.

If you’ve been sold into the idea of the “trading lifestyle” sitting on a beach with your laptop and doing an hours work a day, you may want to reconsider. Most successful traders spend a good chunk of time with their head in spreadsheets or trying to understand the motivation behind the movement.

It’s not quite as glamorous as some like to make out! Although traders do get to choose their own working hours…

What do traders use spreadsheets for?

Spreadsheets can be used for just about anything these days. Traders use them to track trading volumes and activity in relation to a number of variables such as time. I’m led to believe the big betting syndicates also use spreadsheets to create their own prices and back them with huge sums of money.

Betfair does have a basic profit & loss dashboard, but to filter between certain sports and events, most traders will export these results to a spreadsheet. By doing this, it allows you to create charts and other graphics from your results and have total control over how you view your results data.

What gets measured gets actioned

For example, if you trade pre-race and want to find out which courses you perform the best at, a quick filter in Excel will do the job perfectly. Another example might be to keep track of your trades and break them down into categories like swing trading or scalping. The more data you have; the more you can improve.

Depending on your trading style, you may have to make plans before you trade. For example, when looking for in-running opportunities you need to figure out which horse is likely to get a soft lead. Alternatively, you may need to see if it has a habit of trading at low odds before blowing up.

Will the price remain high because layers are expecting it to stop in the final furlong?

Another example may be football teams that have a habit of scoring late in the game. You may use these for lay the draw or team leading trades. But this requires actually reading the game situation at the time, not everyone can do that.

Nonetheless, keeping all of this information in your head is practically impossible. Building up a nice spreadsheet of selections will not only help you on the day of the trade but also in the future. The more data you have, the more knowledge you have to attack the market. It’s also always helpful to be able to look back and see what selections you have made in the past. You may start to notice a pattern (winners or losers) that you can use to optimise going forward.

You’ll start to notice that some of the more seasoned and profitable traders collect hordes of data. Sometimes intentionally, sometimes just out of habit.

Some data-points worth collecting have already been mentioned above, but here are a few other ideas to get you thinking:

The possibilities are literally endless. The most important thing to remember is that, there is no point in collecting data if you are not going to spend time reviewing it. You have to make time to dig in and see if any patterns have occurred that might help future trades.

Finding something that others are missing can lead to a lot of profit. Some of the most successful trades in history have come from meticulous research into data that nobody else thought to pay attention to. Take the mortgage crisis from “The Big Short” as a more well-known example. That’s an extreme example and is unlikely to happen in sports, but you get my point…

Whilst historical data does not predict the future, it can be helpful to unpick motivation.

PatternForm is the self-proclaimed “Best Kept Secret On The Web.” Although it’s not quite a secret anymore, it’s definitely a bit of a hidden gem. Especially as it’s completely free.

Don’t be put off by the lack of “bells and whistles”. The website isn’t the prettiest thing to look at, but it does hold a great deal of useful information.

PatternForm has a few variations of cards available. They are PatternForm Cards, DOB Overview Cards and MoneyForm Cards. All have slightly different features and uses that I go into in more depth here.

PatternForm is usually helpful for in-play trading (horses) as it shows a bunch of information relevant to that. For example, you can see the lowest traded price of a horse and also the number of times it has halved in price (DOB).

It also acts as a great way to quickly sort and filter race cards for the day. For example, it’s extremely quick and helpful to be able to see if this is a horse first time running a particular distance or track.

All in all, PatternForm is a really useful, free and flexible tool that you should be making the most of if you’re not already.

Live Stats (During the Event):

Although not exclusively available on Betfair, in-game stats can play a big part in many traders daily routine.

Just like historical data, you have to bear in mind that it’s just one variable. As much as we’d like to quantify every single aspect of every sport, it doesn’t always give the full picture.

For example, if you’re relying on in-game stats such as “shots on target” to make in-play football trades, you could get caught out quite badly. Although the ball was technically on target, it does not in any way imply that it was a good shot. In fact, it could have been practically a dribble towards the keeper’s hands. This is basic, but it’s an easy example of why not to trade based on stats.

There’s a big difference between a ball slowly rolling to a keeper and a Ronaldo-Esque free-kick flying at a hundred miles an hour!

Still, almost every in-play trader will take a look at in-play stats at some point during an event. You should go to the next level though and track xG – Expected Goals. This data is far more reliable and really shows you who is on top in a game.

Some Betfair API software will even hook up with these stats to help create various trading models. Although, I would suggest you play with creating and understanding your own model before relying on another.

In-play stats can be particularly useful on busy sports days and during large tournaments such as Wimbledon. If your in-play strategy relies on certain scoreline conditions, it may be more sensible for you to just keep an eye on the in-play stats until an opportunity presents itself. From that point, you can focus in on that match and take other factors into consideration.

What tools do you use every day in your trading routine?

Comment below or tweet me at @CaanBerryTrader and let me know what tools you find most helpful. Bonus points for sharing which tools you avoid when trading. Keeping things simple often goes a long way in the world of trading!

Next Read: 5 Matched Betting Tips (to Help You Win More)