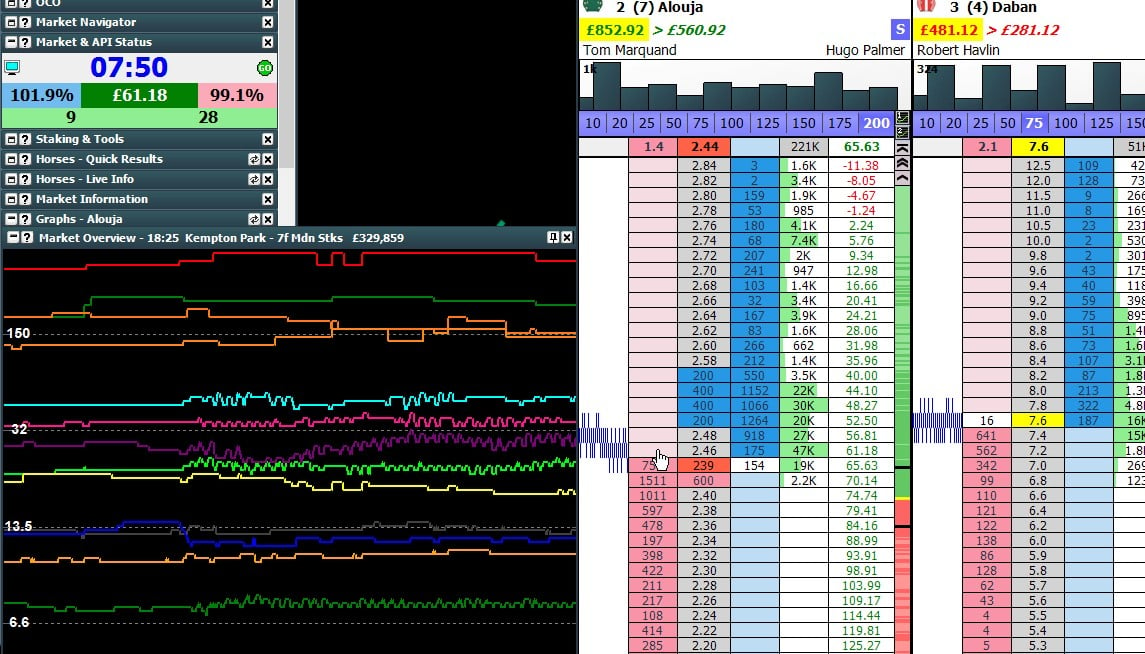 Every betting market see’s thousands of pounds turned over by one Betfair bot or another.

However last night a very large Betfair bot went berserk and showed their hand! And then gave away a small fortune over a number of races.

Lets have a look at what actually happened, and how you could have made a killing from the automation on Betfair in the process…

It took me a race or so to realise what was actually happening. But once it became clear, it was literally handing out free cash.

If you take a look at the screenshot below. You can see quite clearly when the Betfair bot flicked on, what happened, and how much it was matching. 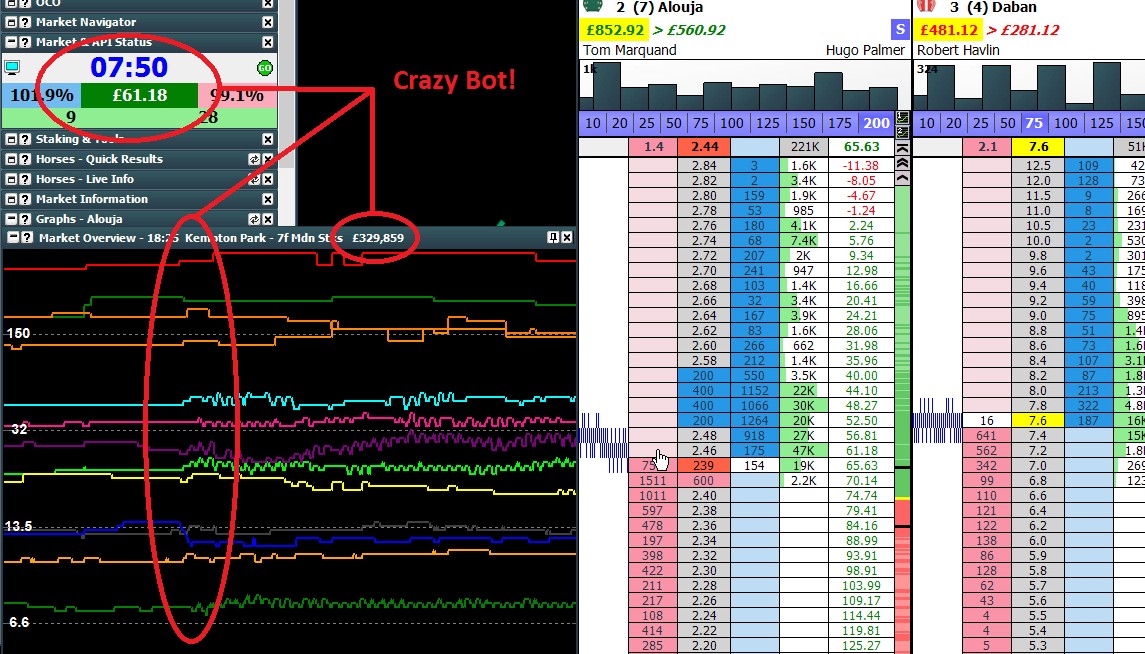 A race of this nature wouldn’t usually fetch a huge amount more than what was already matched at 7.50 to post time (£329,859). However, by the time it reached the start it was more like £1.4 Million matched. That kind of volume on a poor quality race at Kempton is just insane.

Looking at the market overview on the geeks toy software it’s clear when the Betfair bot started to malfunction.

I didn’t hesitate all that long to start plugging orders into the market for an easy match on both sides of the book. It turned out to be quite a good evening… that saying about “if it’s too good to be true it won’t last” wasn’t really the case last night! In one of the races I staked nearly £40,000.

The bot was just matching money again and again on alternate sides of the book, giving away massive value in the process. Result being the races traded more like a feature event on a Saturday afternoon.

It didn’t stop there…

Race after race it happened again and again. By the end of the evening I can only assume the owner of this particular Betfair bot’s account was well and truly drained. As time went on it became less and less aggressive, most bizarre.

It’s impossible to know exactly why this happened, unless the bot was yours. I can only imagine how distraught the loser must be on logging into their account, although I’d imagine they usually do quite well anyway having a Betfair bot and balance of that size.

Last time something like this happened Betfair voided the market. But it’s been quite a while now so I’d assume the results will stand!

After the first race I spoke to Peter Webb of BetAngel to get his spin on things. He too was watching with amusement although certainly wasn’t his bot from the response.

It’s quite likely that human error means a bot trigger was left incorrect. There was no other changes to the markets that I can see would have effected things. Although it did leave me pondering what the triggering criteria for this kind of bot would be. If anyone has another angle please feel free to drop it in the comments at the end of this post.

If It Happens Again, You Should…

Make sure you let me know, drop me a tweet!

Joking aside, if you’re fortunate enough to see this kind of activity again don’t hesitate to get involved in the action. Turnover like that, taking prices offers great value. Scalping the market becomes extremely easy as you can see from the results above.

By offering prices in the market the bot is likely to bounce up and down matching your orders. That’s pretty much what I did, with a bit of an opinion where the price was going as it got closer to post.

Each time the bot throws a bet in above and below (like the image above). Bets are waiting for the invaluable match.

It’s probably just a rare occurence in truth, although a lot can be learnt from these situations at times…

Related: Betfair Automation – Is it Worth It?

10 thoughts on “Betfair Bot Goes Wrong! Did You See It? (Rare Opportunity)”