So after my previous post I thought I best look into this football trading malarkey. I have traded the football briefly before although never with the thought of doing it seriously. The main reason being I know next to nothing about football! I’m not sure if this is a good or bad thing at this stage, obviously I’ll have no bias towards teams or players… its literally a blank canvas! 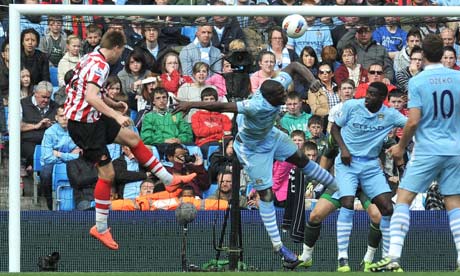 I’m hoping I can apply the usual common sense along with what I already know about how markets work and make a few quid. My first real go was just the other night on the Man City v Sunderland game.

After Man City being the favourites had scored there price crumbled to a supper short 1.05! Now this in hign sight was a good opportunity to get in, I’ve dabbled with the tennis before and much like a first set being won the odds can be artificially low. When their that low it gives the opportunity to open a position for low liability yielding a higher return if things change. Not only does it not have to be an equalizing situation but if Man City start to go though a rough patch of play the price will drift. Shortly after that did start to happen, also a player appeared to be injured for a while which pushed the price back out to 1.10 mark….. at this point I’d missed some of the value but thought I’d have a dabble, I think I got in around 1.08 or 1.09 for £15 liability, the potential upside though was far greater!… anyway, the point is it was a point of compression in the odds. When I entered it was around 30 mins into the game, I went on to hold that position untill about 10 minutes into the second half… the price was still trading at 1.10/1.11, it was here I exited for a £2.72 green i think it was.

Now it wasn’t a great profit at all although I see it as a very good trade, reason being it allowed me to be in the market for 30 – 35 minutes where something could have happened producing a big return, worst case I would have lost £15. It’s just sods law that Sunderland scored shortly after!… still I hadn’t hedged at all so my £2.72 green unhedged turned into £12 green…. not bad for a low risk dabble! I’ll be looking for more opportunities like this as at them odds the potential upside is always massive in comparison to a loss.