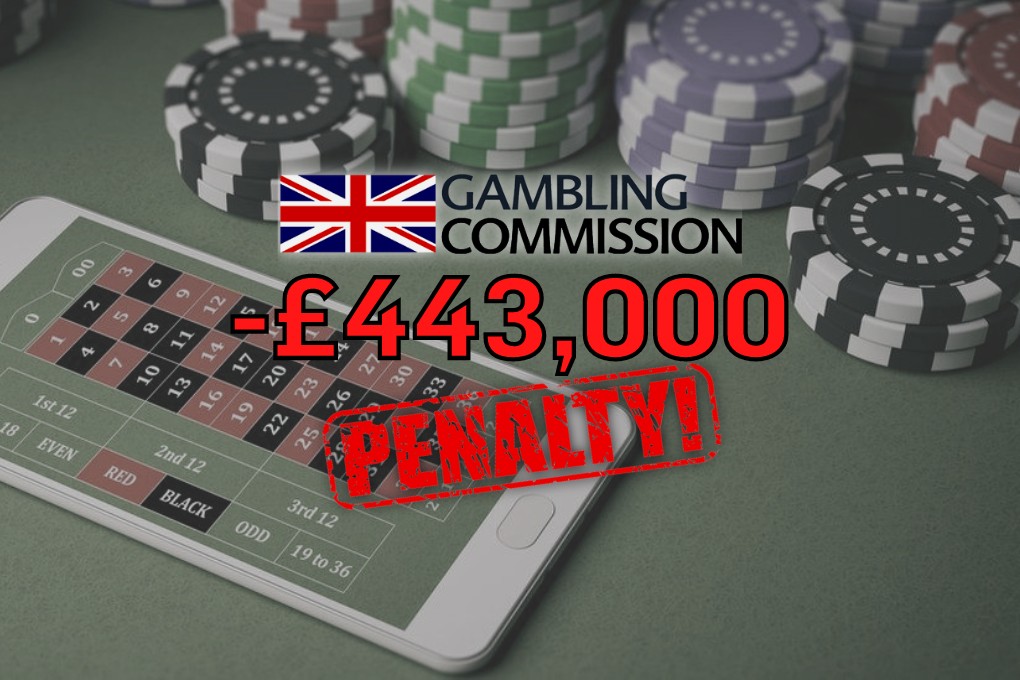 This week the gambling commission fined TonyBet Over £400,000 for a mixture of failings, but the announcement was more significant than usual.

The gambling commission specifically said that the company’s terms and conditions were unfair, referring to the withholding of customer withdrawals.

No doubt many readers of this blog are interested in what happens next (as am I). The abuse of affordability and source of wealth checks have been used against winning customers on a routine basis over the last few years. It’s something we’ve all been complaining about repeatedly, sky sports racing even held a debate show about it (bookies and GC refused to appear).

But so many questions are unanswered…

The gambling commission has said: 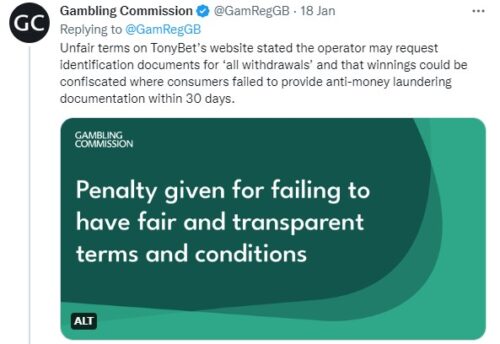 What About Other Companies?

Despite being 2-3 years overdue, it’s a positive sign to see the commission acknowledge the problem. I guess it’s more than they did when they were warned about the imminent collapse of Football Index 6 months before it happened.

As a side note, this also raises another question. The GC licensed Football Index, so presumably, they thought their terms were fair?

There have been so many other companies using affordability, money laundering, and source or wealth checks to ban successful gamblers and withhold winnings. For example, take a look at this email from Unibet recently… 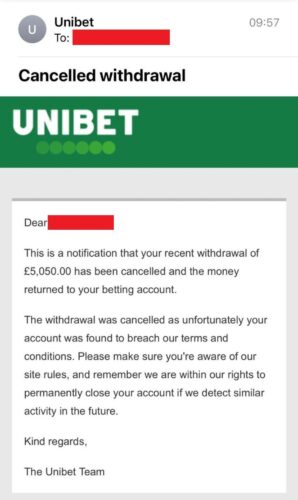 What about companies like Unibet, Skybet, and William Hill?

We’ve had plenty of contact from followers about all three of those companies (and others) regarding document requests only happening at withdrawal. Last year, one follower faced 16 weeks of these checks requesting bank statements for a £10 deposit with one of them. It was around the same time the same brand got fined £3,000,000 for failing to do checks on addicts that had deposited over 6 figures.

Where’s the consistency? Why is TonyBet the only one being peanalised here?

But it gets worse when you consider eCOGRA and IBAS have routinely sided with betting companies unfair terms. These “independent dispute resolution” services have been supporting the misuse of these checks that are supposedly there to protect the vulnerable. 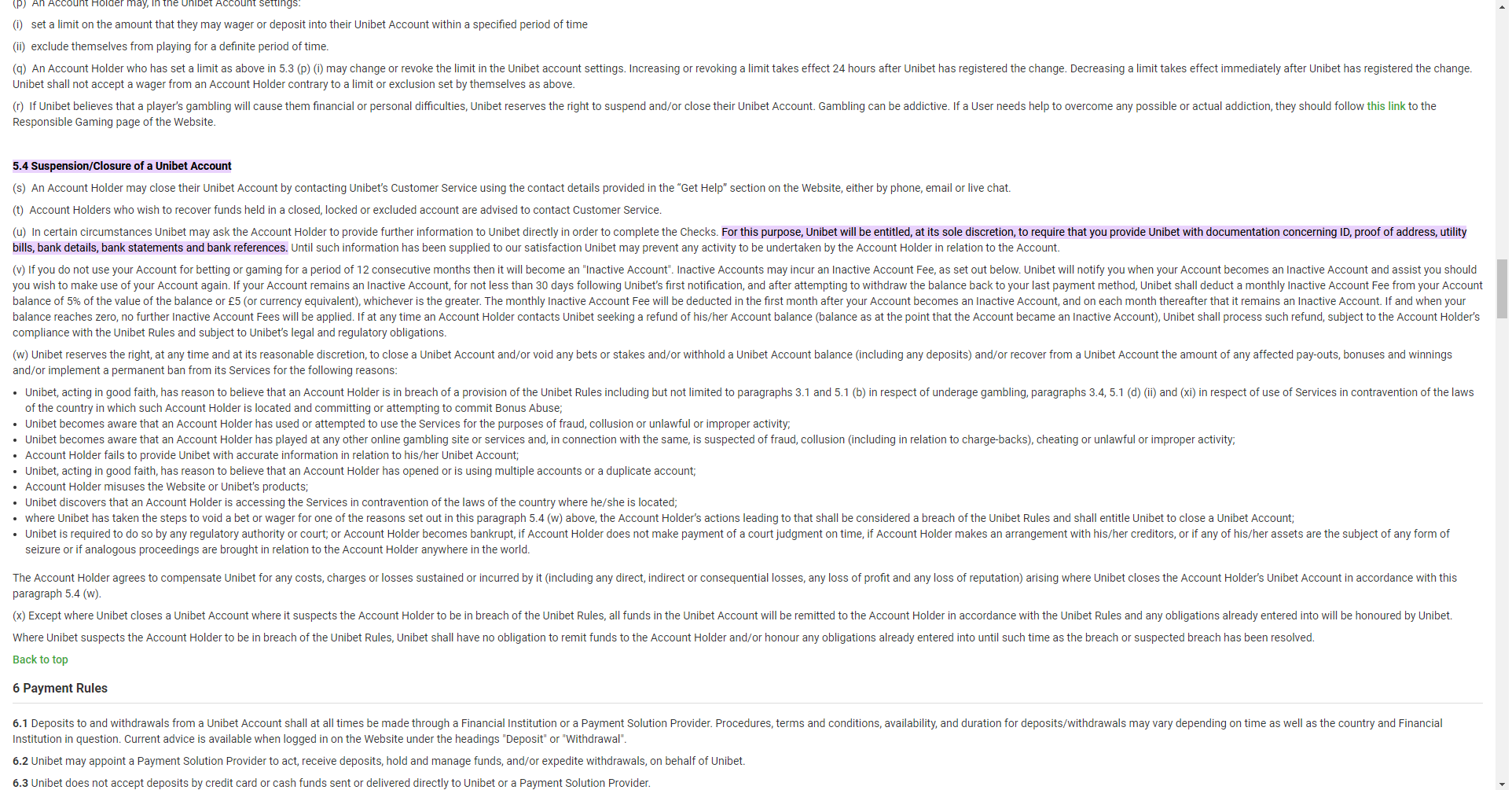 How can IBAS be put forward as the new gambling industry ombudsman when they’re endorsing the use of financial checks only after a consumer has won some money?

What will happen to all the consumers that have not been paid with said terms as the justification in the past?

What is Unfair? What Are The Rules?

It’s as clear as mud. The gambling commission has said that they found TonyBet’s terms to be unfair, saying that the operator may request documents for ‘all withdrawals’ and that winnings could be confiscated where consumers failed to provide documentation within 30 days.

You just saw that email from Unibet right?

The gambling commission needs to be transparent, fair and open themselves. Maybe we need a regulator for the regulator?

On the other hand, I’ve seen bookies complaining about unclear rules in the past and, it’s one of the very few times I feel sorry for them. How can you ensure the rules are adhered to when the regulator won’t tell anyone what the rules actually are? Where is the line? What is fair and what is not?

Immediate responses often point out that they can’t clearly state the rules and boundaries at which checks start because the system would be exploited. Presumably, those who respond like this think that the current subjective interpretations of the rules are better (or maybe they work for the companies doing it).

My point is this – if rules and laws aren’t clear and based upon factual data, how can we trust the rules?

The entire argument descends into a pit of opinionated chaos. Plus, what’s the issue here? If checks have to take place at say £3,000 the system could be somewhat exploited, but hardened criminals are stopped from doing anything serious, addicts can only do limited damage and all this 16 weeks of checking on a £10 deposit nonsense stops.

Simply posing for photos with anti-gambling groups, refusing to appear on sky sports racing when requested and handing out fines without any clarity isn’t good enough.

The Gravy Train: Will It Ever Stop?

It appears there’s a consistent theme here, aside from betting companies taking the utter piss with regulatory checks.

Unsurprisingly, it’s money. Will it change? Who knows, although it doesn’t look likely given the current setup.

The end result is; the commission looks like they are doing something whilst getting paid, the anti-gambling groups get paid, the operators get paid, and the consumer pays for it.

It’s one big incestuous loop of back-slapping and self-funding where absolutely fuck all gets regulated.

Related: The Dark Side of Gambling Regulation